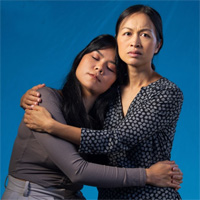 Following the end of the Vietnam War in 1975, it’s thought that over one million Vietnamese left their homeland to escape persecution and atrocities committed by the Vietcong. Roughly 800,000 survived, mostly by going to sea in overcrowded fishing boats – these became known as “the boat people.”

Sangeeta Wylie’s story is about the Truong family’s perilous journey from Saigon to Victoria, British Columbia. The story of hardship, chronic fatigue, dehydration and separation is retold by a mother who survived this odyssey to her youngest daughter four decades later. The play’ narrative time shifts between the late seventies and the present through flashbacks.

A middle-class couple with six children flees the communist government controlled Saigon with just the clothes on their backs and family owned gold hidden on their person. On the mother’s journey, which at one point, she is separated from her husband by pirates on the high seas; she meets two other women in the same predicament. One, a sympathetic widow whose husband, an opium addict dies on the voyage; the other, a cynical former prostitute. Hence the title, which comes from a repeated line in the play: “we the same – refugees!”

While the story goes back and forth between the past and the present, it also twists and turns between the matriarch’s memory and actual events. The play’s time shift is initially confusing, though I’m sure it would be less so when seen live on stage. Elizabeth Thai and Grace Le as principle characters mother and daughter don’t change their appearance, or even their clothing over a forty year period, so there is difficulty in determining which epoch is being enacted when only Thai and Le are on stage.

Kimira Reddy’s colourful scenic design together with Sophie Tang’s lighting helps to propel the narrative. Though, unfortunately camera angles didn’t do these elements justice. Shanny Rann’s vivacious choreography adds an interesting entertainment factor.
Elizabeth Thai brings an incredibly nuanced performance both as the caring mother and a reluctant fugitive. Grace Le does well, considering she was required to portray aspects of her character that are twenty years each side of her actual age.

I suspect that Amy Strilchuk’s dramaturge is still a work in progress. I would like to see this play again a year from now with further development of the protagonist’s relationship with the captain of the rescue vessel and perhaps less explication of her rapport with other female refugees.