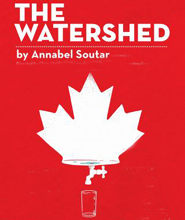 Right on the heels of The Pipeline Project, Gateway Theatre almost immediately serves up another theatrical documentary. This time, it's Annabel Soutar’s urgent documentary drama The Watershed about the federal government’s closure of the Experimental Lakes Area (referred to as ELA throughout the play) in order to save two million dollars a year in public funding. Soutar places herself as the protagonist and her passionate investigation into the Northwestern Ontario research station closing is the play’s central theme.

About five years ago, director of Fisheries and Oceans Canada Michelle Wheatley cut bait on the day-to-day operations of the Experimental Lakes Area, scheduled the cessation for 31 March 2013, and forbade scientists from speaking to the media.

The only previous time I’ve seen an Annabel Soutar play was when attending Seeds at the Kay Meek Centre in January last year. Seeds, about Saskatchewan farmer Percy Schmeiser’s crusade against Monsanto, was also equal parts documentary and drama and perhaps coincidentally also featured veteran actor Eric Peterson. Just as in this in this battle, the “good guys” finish in second place.

The role of Annabel Soutar is ably played by Liisa Repo-Martell, who injects verve and resolve into the playwright’s persona. The rest of the cast play an improbable array of real life characters that include leader of Save the ELA Coalition Diane Orihel, recipient of the Stockholm Water Prize David Schindler, Stephen Harper, Gian Gomeshi and (at that time) federal minister of Natural Resources Joe Oliver.

Eric Peterson, who is still best known for his role as Oscar Leroy in Corner Gas puts in quite the shift as Dr. David Schindler (ELA founding scientist and its first director), Annabel Soutar’s politically right wing father and Joe Oliver, who he imbues with more colour than one might expect from the real politician.

Not all characterizations of real politicians hit the mark. Tom Mulcair is played by the attractive Kimwun Perehinec wearing am awful false beard. Depending on one’s political leanings, it was either hilarious or disrespectful.

Julie Fox’s set is both minimalist and versatile. Ever-present props like a WC, a bathtub and an elevated network of white PVC piping adorn the stage. Although, for some unaccountable reason, the pipework has an expansion loop configured in it. The stage floor was covered with hollow wooden transoms, which had the unfortunate effect of staring down a bank of black rectangles if seated in the first couple of rows. With clever re-arranging of set pieces, the staging serves as the inside of a Winnebago, a frozen lake, a conference hall, a CBC sound studio and Soutar’s family home.

In this fairly complex, fact-based storyline, Denyse Karn’s projections are helpful in identifying characters, and the time and place in many of the scenes. Thomas Ryder Payne’s sound effects compliment Soutar’s storytelling miens.

The play runs for around two and a half hours and at times feels longer. Ten minutes could be easily cut from each of the two acts without sacrificing either dramatic arc or content. Nevertheless, this is a topic that concerns us all as we confront the “inconvenient truth” of climate change and the impact on our most precious resource.

The research facility at the Experimental Lakes Area is now administered by the International Institute for Sustainable Development (IISD) led by Dr. Henry Venema on behalf of the Government of Ontario.