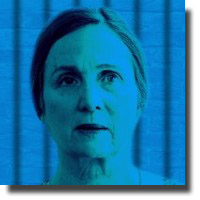 In October 2007, young offender Ashley Smith while in custody at Grand Valley Institution for Women was placed on a formal suicide watch. Despite guards watching her on video monitors, Smith was able to strangle herself with a piece of clothing. Forty-five minutes later, guards entered her cell to confirm her death.

Judith Thompson takes this real life event as inspiration for her fictionalized single act drama that tells the story of Glory, a chronically disturbed teenager sent to juvenile detention to serve a six-month sentence. Through additional punishment for multiple miscellaneous offences, the six-months stretches into five years, mostly in a segregation facility. Her defiance against corrections officers is ongoing and irresolute.

The play’s creator intelligently rotates the roles of Glory, Rose, the girl’s adoptive mother and Gail, a sympathetic prison guard who oversees Glory during her incarceration in a federal prison. With only minimum costume adjustments, she holds the audience using only vocal modulation and stage presence. It’s fascinating and even moving to see Judith Thompson take on such a demanding triple-role, which sees her on stage for the play’s entire eighty-minute run time.

Astrid Janson’s set is essentially a black box, save for a white room with two sides closed and two sides open to the audience. There is also a wooden rocking chair placed at centre stage, used only by Thompson in the role of Glory’s mother.

The problem of what to do with people we don’t like has been around since we (or at least most of us) learned the difference between right and wrong. Watching Glory Die is uncompromising and well-crafted. If it fails to adequately entertain, its emotional impact requires us to look introspectively at how society handles its most marginalized citizens.