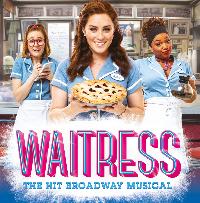 Waitress is a whirlwind of love and drama, coming dangerously close to soap opera territory yet evading over-the-top melodrama that we might ordinarily expect from such plotlines as extramarital affairs, an unwanted baby, and villainous husbands. More tragic elements masquerade as romantic comedy, with an appealing lightness of being that expresses itself in surprisingly carefree love, singing, dancing, friendship, and pies.

Based on the original screenplay of the same name written and directed by Adrienne Shelly (who was herself tragically killed just a few months before the movie was released), Waitress is the story of a Southern woman trapped in an unhappy marriage, who works at Joe’s Pie Diner and daydreams her way through unique pie recipes, which reflect the trials and tribulations of daily life as well as her hopes and dreams for the future. I loved Waitress when I first saw it in 2007. I loved the story, I loved the pie making montages, I loved the quirky humour in spite of its serious subject matter.

The story lends itself well to a Broadway musical adaptation, and Sara Bareilles’ music and lyrics are tender, lovable, and fun. The songs are interjected naturally and seamlessly throughout the storyline, and are easy to digest, whether upbeat and catchy (such as “Never ever getting rid of me”, sung by the tenacious Ogie played warmly by Brian Lundy) or sweet and heartfelt (such as the popular “She used to be mine” sung affectionately by Bailey McCall in the role of Jenna). Right on stage is featured a modest but perfectly blended group of musicians providing music (only piano, keyboard, drums, bass, cello, and guitar) led by Conductor Alyssa Kay Thompson and Music Coordinator John Mezzio. Stage design is very on point, from tiny diner shop details (with racks filled with pie ingredients) to extremely authentic hospital rooms - with those pale green coloured walls and an actual hospital bed.

The roles in this production are perfectly cast, with the adorable Gabriella Marzetta and boisterous Kennedy Salters in the roles of Dawn and Becky, Jenna’s diner co-workers who are heavy hitters performance-wise, each with very unique voices that create an interesting blend when singing together (“A soft place to land”). Their rough yet kind boss Cal who runs the diner is well cast as Jake Mills who perfectly embodies Cal’s gruff but lovable temperament. Joe, the crabby diner owner and Jenna’s regular customer is not-so-secretly a heart of gold type played by Michael R. Douglass, and Jenna’s bad-tempered husband Earl is played by Clayton Howe, who gives a believable performance without bringing too much darkness to the role. David Socolar is endearing as the bumbling new doctor and Jenna’s love interest. There are truly no weak links in this ensemble, and even smaller roles of diner customers who double as back up singers and dancers create an atmosphere that is perfectly curated and delightfully engaging throughout.

Overall, thanks to a very talented cast and brilliant direction, the story keeps all of its nuance and depth without getting too dark and heavy. McCall as Jenna truly steals the show with her sweet singing voice, and really hits her stride as her character grows and delivers a believable while not overly saccharine ending. Truly, Waitress gives you something to cheer for without leaving you too heavy. Kind of like a good piece of pie.