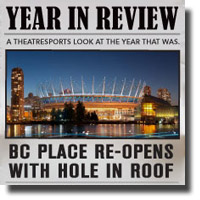 There was a lot of laughter on opening night as the VTSL players did their improvs. Although the topics were interesting, the flow of the storylines lost a lot of focus. This is normal in an improv-- you tend to digress. Take the Schwarznegger skit about pregnancy. Insead of focusing on his siring a child with his maid, the actors did a replay of the Arnold film comedy about men getting pregnant. This wasn't what the audience asked for.

I also didn't quite understand the astronaut skit about 99 year olds in outer space? The idea there was to make a skit about a 99 year-old who finished his college degree.

Nevertheless, there were funny moments. I liked the part where two young girls, probably still in high school, came up on stage and volunteered to be the hands of two of the improvisers: a guy who represented one percent of the population (the very rich) debating against someone representing the 99%, on the topic of taxes. Some of those hand movements were funny.

Well, as in all improvs, you're taking a chance whether you get the audience riling or not. I wasn't laughing much. Maybe if I had a few drinks like the rest of the audience, I would have laughed at anything, corny or not.