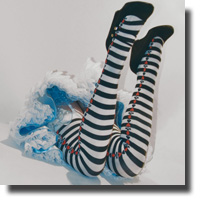 Vixens of Wonderland is a take-off from CS Lewis Carroll's' Alice in Wonderland adapted into burlesque and musical theatre and set in a cabaret-style atmosphere.The 2.5 hour show is filled with Carroll's well known characters and updated to a sexy, contemporary twist.

For example, the Queen of Hearts starts off as a Red King and ends up being a Red Queen in disguise. And nowadays, burlesque caters to all genders: lesbians, homos and heterosexuals. That's the way to go--cater to all audiences because that's how to rake in money from the box office.

The set design which includes a walkway towards the audience was effective. In fact, the actors even went further by mingling with the audience in some instances. However, there was a problem with sight lines. If you were sitting at the back with other tables in front of you, you missed some of dancers especially when they were dancing/lying on the floor. Perhaps next time, a raked stage could be constructed to make the view better from all angles.

But the show was a romp despite its length. Ideally, a show shouldn't go over two hours including intermission. Most of the actors are graduates of the Musical Theatre Programme at Capilano University. I reviewed Concrete Vertigo's fairytale production of Grimm Girls last year and it was also a romp. Most of the actors from that show appeared in this one.

Looking forward to another fairytale production of this company!