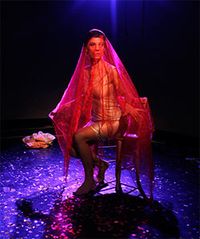 The Firehall ArtsCentre
The Village by Tina Milo

I didn't quite get the relationship between "village" and the main topic of the show which dealt with depression. I believe it was mentioned in passing, but when the title is "village", then efforts have to be put to connect depression with the title. And I didn't see that.

Besides, depression is a trite and trivial topic. Everyone sufferes from depression in Vancouver especially in the winter. In the case of Milo, it's depression of an immigrant to Canada, which is normal, and accoridng to Donna Spencer, "She sinks into a depression common among female immigrants left at home alone".

But coming from a war-torn country, Serbia, her depression which only borders on boredom is nothing compared to women who have been raped and tortured during that war in the 1990s. And so, from the thematic point of view, I'd give this show 5 out of 10.

However, Director Milosevic somehow puts some colour in the play by having Milo sing and dance, and change costumes on stage. She has aal these gimmicks that get you out of the doldrum of a woman depressed because of boredom. In this case, productionwise, I'd give the show 7 out of 10.