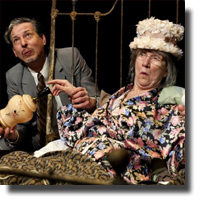 Woody Allen once said in one of his funnier films “Life is full of misery, loneliness, and suffering - and it's all over much too soon.” In Likeminded Co-op’s production of Morris Panych’s Vigil, the end of life can’t quite come soon enough for the anti-hero of this black comedy .

Kemp (Allan Zinyk) is a self-absorbed middle- aged man with a quirky epicene personality tilt. He gives up his so-called life, which, by his own account is not much of a sacrifice, to spend the last days attending his dying Aunt Grace (Anna Hagan).

It seems like a noble cause – right? Well, no. Kemp isn’t planning on playing nursemaid and dutiful nephew for very long. After all, they haven’t seen each other in 30 years, so there is little emotional investment. But perhaps it’s just through having another human being around (albeit a pathetic one), but regardless of the reason, Grace’s health starts to improve, much to Kemp’s chagrin. On the other hand, Kemp’s stamina wanes as he becomes more and more impatient for the old lady to “kick the bucket.”

As days become weeks, and weeks become months, our miscreant decides to be more inventive in order to speed up the process. He rigs up an apparatus that will facilitate the finality, should the old dear so desire. Alas, the hapless Kemp only succeeds in electrocuting himself and getting knocked unconscious.

When New Year’s Eve rolls around it brings with it a couple of plot twists that take the audience by surprise, and even saves the play from its own over-arching premise.

Allan Zinyk as the dyspathetic Kemp carries the entire sharp Panych dialogue almost single-handed and does it incredibly well. Anna Hagan puts in a sublimely droll performance as the old lady who takes a turn for the better; regardless that her first and only line in the opening act is “Merry Christmas” which she utters in the last scene.

Director Kim Selody allows Panych’s style to show through with the play’s numerous truncated scenes, particularly in act one. Glenn MacDonald shows creativity with the production’s design elements. I initially thought Zinyk’s poor fitting suit to be haphazard, but in fact is a device deliberately designed to expose the character’s personality. Kevin McLardy’s sound effects fill in most of the gaps.

Despite some of its Théâtre de l'Absurde elements, Vigil is a poignant satire that deals with life, death, yearning and “butterscotch pudding.”