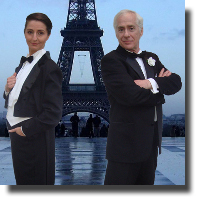 When you're old and grey, escapist theatre is one's outlet. No more are the rebellious anti-theatre, intellectual dramas that a young academic critic is fascinated with. Pure entertainment is what old foggies like me look for these days. And this musical is pure, escapist entertainment that leaves you musing with songs like Crazy World until you fall asleep and enter the realm of dreams.

Based on the 1982 movie starring Julie Andrews, the musical is about the career of Paris entertainer Victoria Grant (Sylvia Zaradic), who with the help of  Toddy (Jeff Hyslop), becomes a star female impersonator, only to fall in love-at-first-sight with macho King Marchan (Matthew Graham). Musical numbers include Le Jazz Hot, You and Me, Almost a Love Song, Trust Me, Living in the Shadows, Paris By Night and Crazy World.

Wonderful acting by these thespians. Jeff Hyslop introduced the musical, saying that he had a knee accident and his understudy Seth Little was going to play Toddy until Wednesday when he feels he'll be all right to assume his role. Seth Little's role as Henri Labisse went to Director Mark Carter who got a bunch of laughs from the opening night audience. I was also impressed by Little. He had more than little to give, so to speak. He sang well, hit those punch lines right, and had quite a good rapport with the audience.

Zaradic stole the show, of course, with her soprano singing reaching those high notes that made glasses crack as well as my eardrums. But supporting actor Karin Inghammar got a big applause during curtain call for her zany role as the burlesque dancer Norma Cassidy, girlfriend of King Marchan. Graham played Marchan quite well, low-keyed as expected from his role, almost the same way James Garner played it in the movie.Grant Vlahovic, Marchan's bodyguard, an ex-football macho player, comes out of the closet on his "birthday" . Vlahovic's scene with Little was hilarious.

The dancers and the ensemble under Ken Overbey's choreography and the band under Musical Director Christopher King were terrific; even the technical effects were great. Sound designer Andrew Tugwell timed the mikes to near perfection when the singers began to sing. Lighting was well-designed by Darren W. Hales. Costumes by Patricia McClean were in tune with the Parisian era of the 30s, and Grant Windsor's set design was simple but effective and functional.

It's always a full house when the yearly musical is presented at Matro, and the cast and crew deserved the prolonged standing ovation on opening night.