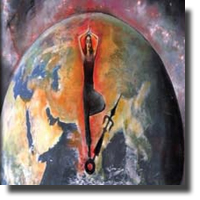 David Hare’s The Vertical Hour is about individuals that have opposing views and it attempts to provoke thought through discussions of politics between Iraq and the United States.

In the first scene, we meet Nadia and Dutton. Nadia, an established academic of Yale University, is dismantling Dutton’s essay. She is analytical and cerebral, whereas Dutton seems to see the full picture and a laissez-faire approach. At the end of the scene, Dutton admits to have fallen in love with Nadia. The two never act upon impulse and we are left wondering what’s next.

While visiting Phillip’s father, Oliver, in the country Nadia and Phillip spend a couple of evenings at his estate close to the Welsh border. While staying at Oliver’s cottage, Nadia cannot sleep due to jetlag. She leaves Philip’s bedside to talk with Oliver.

Oliver explains more about Phillip’s mother; Nadia admits more about her time in Iraq as a war correspondent and they both becomes bitterly nostalgic. Morning breaks and Phillip awakes to find his lover, Nadia, not sleeping beside him.

Phillip’s actions and somewhat immature accusations stem from knowing his father’s history of reputably careless behaviour, and from assuming that Oliver had taken Nadia to bed. Nadia admits to liking Oliver, but Nadia assures him this is not the case and the two reconcile.

It is in the last monologue that we hear Oliver hint at having heard about Nadia being in the newspapers in a different light, and at first it is predictable. Hoping that we would connect with the student Dutton again, we find out that she has only decided to go back to her journalist roots in Iraq. Terrie, a new student, is meeting with Nadia and the two are dismantling another written work. This ending felt lacking and predictable, and hastily completed.

Despite a small cast, the show missed major blocking and body language or movement in the show. Their monologues towards the audience were great transitional pieces. However, both minor supporting actors do not seem to have any purpose in the play. Louise Porter’s acting as Nadia is strong but her role seems too old for her to play, almost to the point of having a child play with their mother’s wardrobe. Dutton and Terrie’s roles are irrelevant and do not appear to add to the show. Oliver and Phillip’s banter is a bit vague but is the highlight of the show.