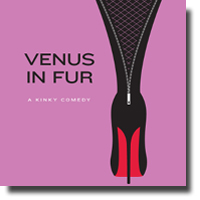 Venus in Fur by David Ives

David Ives’ multi-layered, two-handed power play starts and ends with a thunderclap. In between, Ms. Angell’s Vanda Jordan stumbles into Thomas’s (Vincent Gale) audition studio just as he is ready to wrap up a frustrating day. Failing to find an actress up to the role of the Wanda character from Leopold von Sacher-Masoch’s similarly titled Venus in Furs, the last thing this director wants is to run another audition. Particularly when the actor in front of appears to possess the same negative attributes as those already rejected. But there is more to Vanda than meets the director’s eye.

In the play’s early scenes, Angell’s pragmatic Vanda plays off Thomas’s theatrical snobbery. Yet, as the play progresses the line between actor and director becomes blurred; as indeed does the personas between playwright Ives’ characters become analogous with Sacher-Masoch’s Wanda von Dunajew and Severin von Kusiemski.

Last year, Lindsey Angell played Portia, Shakespeare’s heroine in a production of Merchant of Venice. Vanda Jordan is to some degree, a 21st century Portia – resourceful, quick-witted and desirable.

The play works really well when Angell is in control and seamlessly overlapping her roles – less well when Gale’s Thomas attempts to regain authority through abusiveness. The sadomasochism aspect is agreeably blithe rather than gratifying and cerebral more than it is physical.

Director David Mackay maintains an eager pace without allowing the premise to be confusing. John Webber, Christine Reimer and Brian Linds combine to make Venus in Fur a quality production.