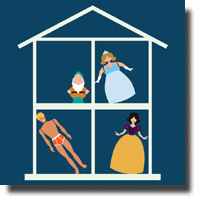 Christopher Durang’s whimsical comedy Vanya and Sonia and Masha and Spike is a satirical mash-up of Chekhov's Three Sisters, The Seagull, and of course Uncle Vanya. It’s an entertaining mash-up, but a mash-up nonetheless. It’s about three middle-age siblings and their issues with aging and regret and a boy toy (Spike) associated with one of them.

The eldest of the siblings, all named by their professorial parents after Anton Chekhov’s characters, is Vanya, played with audacious tongue-in-cheek by the indomitable Jay Brazeau. He is followed by adopted sister Sonia (Susinn McFarlen) who together share the comforts of the family homestead. Masha (Anna Galvin), the youngest of the siblings is a successful film and stage actress, rarely visits the house, but bankrolls the cost of maintaining it.

Vanya and Sonia, while clearly not often seeing ‘eye-to-eye’ with each other have found a convenient accommodation in bickering harmony. Masha, is an egocentric Prima Donna who has come to expect others to accede to her demands without need for reciprocation.

When Masha makes a surprise visit with a much younger male companion (Robert Salvador) in tow and insists that Vanya, Sonia, Spike and ultimately Nina (Katey Hoffman), a twenty-something devotee of the theatre (and in particular Masha), attend a costume party, the household descends into chaos mode.

Despite an absence of economy in the writing that allows some scenes to continue too long after making the point, director Rachel Ditor paces the action fairly evenly.

Jay Brazeau’s second act explosive rant expressing his dislike of change, a hankering for more innocent times (he even speaks of The Ozzie and Harriet sixties sitcom as the pinnacle of good taste), and his apprehension for the future is certainly hilarious, and also seems to reflect his personal viewpoint.

Among the supporting roles, one had to love Katey Hoffman as the naively optimistic Nina who thinks everything is wonderful. It was great to see Carmen Aguirre in something other than Blue Box, and even as a psychic Molly Maid, she still looks sexy.

Vanya and Sonia and Masha and Spike is another solid production from Artsclub Theatre Company. The fine acting and excellent production design more than matched the quality of the writing.