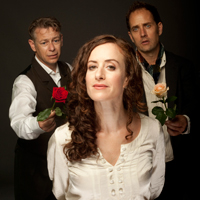 What fine acting! And what a beautiful Chekovian production! Artistic Director John Wright made an unconventional use of The Cultch’s Historic Stage by staging it in the round. His reason? To bring the audience as close to the play as possible.

And it worked. The intimacy of this theatre-in-the-round made us see the characters in a more profound way, as though we were in our living room and seeing these actors interface. In fact, the actors sat with the audience before the play started, and when the lights came up, one by one, they came down to the stage on cue.

The Edwardian costumes designed by Marti Wright also worked, as this play is set towards the end of the 19th century, close to the 1910 Edwardian time frame. And the new translation by Peter Petro suited the actors, and the lines flowed very naturlally. I was particularly moved by the scene where Sonia (Cherise Clarke) and Yelena (Luisa Jojic) expressed raw emotions, crying now, then laughing, then crying and laughing at the same time. This indeed captures the Russian character, so emotional, unafraid to laugh loud one moment and shed tears the next.

This play touches my heart because I played Astrov around 25 years ago, and I remember that comedic moment when Vanya enters with his bouquet of flowers and catches Astrov making love to Yelena. I also was impressed by the naturalness in which Astrov (Robert Moloney) and Vanya (Anthony F. Ingram) exchanged lines so fluidly, as though they were improvising.

Serebryakov (Duncan Fraser) also downplayed his part. It's so easy to overact in a role like this and end up being a cartoon character, However, Fraser did no pompous acting, and was genuine in the delivery of his lines. The supporting actors, Madame Voynitsky (Donna White), Telyegin (Stephen Aberle, and Marina (Mary Black) did a fine job too playing their parts.

Kudos to Blackbird Theatre for another excellent production!