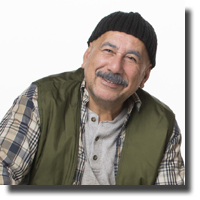 Valley Song is a two-handed, three character play by South African born playwright Athol Fugard (now a resident of San Diego, California). Set in the Karoo, an arid plain in central South Africa, in a time roughly of the play’s writing (mid-nineties). It’s a complex play, yet under Jovanni Sy’s direction, Valley Song becomes deceptively simple and despite the dual protagonist being played by the same actor, reasonably easy to follow.

Abraam Jonkers (David Adams) is an uncomplicated, illiterate, septuagenarian tenant farmer, whose wife and daughter have died some years earlier. His strong Christian faith and closeness to his grand-daughter help him to retain peace of mind despite his strife-filled life. But his faith is both a crutch and a hindrance. His acquired contentment prevents him (and ultimately his grand-daughter) from yearning for anything beyond his “akkers” (Afrikaans corruption of acres). He still maintains the futile habit of addressing white men as “master.”

Veronica Jonkers (Sereana Malani) is Abraam’s devoted grand-daughter who still has enough affection for the old man to call him “Oupa.” She is a free spirit and sees hope living in a new post apartheid South Africa. She dreams of leaving the Karoo for Johannesburg to follow a career as a singer.

The third character is known only as “Author” (also David Adams). He's a kind of phantasmagorical narrator and conversationalist who interacts directly with the audience and occassionally with Veronica. The Author is implicated in the story with actually being a part of it.

Adams manages the dual roles well, despite the minimum of artistic subsidy. There is no change of costume, nor with the actor’s vocal range, except for dropping Abraam’s Afrikaans accent. Sereana Malani is incredibly watchable as the young idealist. When she stands on her apple crate and sings a cappella, there is a confidence in herself and the future of her country.

Drew Facey’s well-constructed set consists of a vertically built structure from hundreds of wooden slats that (presumably) represent a barrier that keeps the characters where they are from where they want to be. Built into the staging is a shallow stoop above bare earth that creates an outdoor aspect. John Webber’s keen lighting delineates the time of day.

Valley Song is more than a socio- political essay or another family drama. It’s a story of impending change in a turbulent time and place – and wanting to be a part of it.