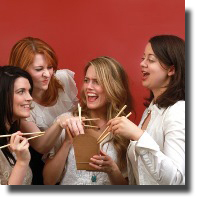 Scarlet Satin Productions, an independent Vancouver company, lives up to its reputation for pushing the boundaries of mainstream theater in their latest production, [un]BOX[ed]. From its unconventional title to its unpretentious venue, this compilation of works brings its audience a unique theatrical experience.

The show comprises four distinct plays, written and portrayed by Vancouver playwright-actresses Frances Kitson, Kaitlin Williams, Diana Squares, and Mary J. Eden. In a medley of satire and drama, these four women uncover a series of honest commentaries on life through varying lenses. The evening commences with a comedic glimpse of workday life, transitioning into a spirited diatribe on the rules of female bathroom etiquette. Following intermission we delve into the dynamics of ‘apartmentality’ and end the night with an intense glimpse of life within the confines of a mysterious cell.

Humour, anger, joy, sorrow, confusion, and depravity are but some of the sentiments embodied on stage throughout this performance. The use of simple props and modest wardrobe draws attention to the dialogue of each scene, creating an intimate setting for the audience to enjoy. A nice touch is the addition of live singing as sets are shifted between plays.

While each play was intriguing, I best connected with Four Women Who Work, and Boxed. The former, written by Squares, brings to life a familiar range of emotions on transit and labour through the use of spotlight acting and fragmented scenes. The latter, Williams’ play, revolves around three neighbors as they wait out a fire drill. The storyline was entertaining in itself, however it most caught my attention as a microcosmic snapshot of the lack of community companionship in our bustling society.

Though accessible and full of character, I found that The Railway Club fell short in its role as a venue for this performance. There was constant chatter heard from the back, the scent of tobacco wafting in from the street, and a smattering of seating with obstructed views. That being said, the actors make good use of the space and spend most of the time standing or mingling with audience members, thereby ensuring the lack of easy viewing doesn't disrupt the experience too much.

If you're looking for a low key and entertaining night out this option will definitely provide you a few chuckles and insights to go home with. It is not a family event however, and more appropriate for those who don't mind a few obscenities and an out of the ordinary theatrical experience. I was impressed by the commitment and passion that these four women and the entire production staff poured into [un]BOX[ed], and look forward to seeing what Scarlet Satin Productions comes up with next.