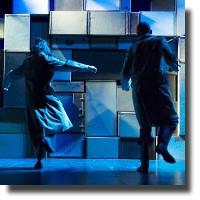 Created by Theatrefront and Western Canada Theatre, this play is an innovative, unique and powerful production. Directed by multi-awarded Daryl Cloran, this multicultural touring production, in the words of Firehall's Artistic Producer Donna Spencer, "celebrates the power of connection across distances and cultures".

In South Africa, ubuntu refers to the spirit of community, the belief that humanity is tied together. In this new collective creation, ghosts haunt a man and a woman, continents apart, as they are drawn together to discover the secrets of their past. This is an international collaboration of Canadian and South African artists tracing the ties that bind us all, with spirited storytelling, music and dance. Canadian actors Eric Goulen (Michael and Caretaker), Tracey Power (Sarah) and Stacie Steadman (Libby) combine their talents with Cape Town South African actors Mbulelo Grootboom (Philani and Sangoma) and Andile Nebulane (Jabba) to tell us a story of how we are all descended from Africans and that we should be aware and learn from our ancestors.

Ancestry has been a tradition in Africa and Asia, where the spirits of our ancestors are alive in our lives. In this new millenium, the world is getting smaller and we begin to be aware that we are the same humans with the same human ancestors, the same genes, all originating from Africa.

Very interesting insights are narrated by Goulem who plays Michael, a university Science professor in Toronto, as he relates the white man's connection with his African ancestors. I was also impressed by the powerful acting of the South African actors, Grootboom and Nebulane.

Firehall's mandate to produce plays in the multi-cultural, multi-disciplinary vein does just that with this play. It continues producing shows about the First Nations in Canada, as well as productions from Latin America and Asia.