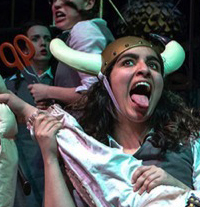 Precisely choreographed mayhem has seized the stage at Frederic Wood Theatre. Alfred Jarrys proto-Absurdist play famously shocked its 1895 audience and prompted Yeats to envisage the Savage God. It is harder now to shock a theatre audience and sensibly Ryan Gladstone does not try. Instead he has found a way to draw a modern audience into Jarrys grotesque fantasy world that also incorporates some of the real-life events from which the play emerged and the result kept the audience in stitches.

Given that the play started as a school-boy mockery of a disliked teacher and in its embryonic form was secretly performed by Jarry and his friends in the attic of a house, Gladstone has devised a dramatic shell which begins with the Grade 10 class of the Jarry Home for Wayward Girls presenting a clandestine, under-rehearsed performance of the play. That an all-female cast is presenting a play with only two female roles is another part of the subversive overthrow of theatrical convention found in the play.

The play itself inhabits a cartoon-like world where all the characters are caricatures, violence is frequent and hilarious, indelicate jokes are rife and logic is tenuous. The plot is a grotesque version of Macbeth set in the imaginary kingdom of Poland, with bits of history and other plays chucked in hither and yon. Pere Ubu, persuaded by his wife Mere Ubu, murders the King and Queen of Poland with all their children except one. Then they dispose of the nobles, overthrow the courts, murder the populace, tax everything and everyone, turn on their own henchmen, and finally betray each other. Meanwhile both the young son, Bougerlas, and Captain Bordure, the ex-right-hand-man, have escaped and return leading armies.

The combination of adolescent, impromptu performance with such a play offers tremendous opportunities for the actors which they gleefully seized. Every one of the 16-strong cast has developed a distinct character, all of them beautifully detailed portraits that capture the movement and gestures and dynamics of a group of 14-year old school-girls. That they can maintain these characters throughout the evening speaks to the high level of their ability. Because their characters cannot act for beans. And they carry this off too.

Naomi Vogt remarkably carried her school-girl innocence into the farcical, revolting Ubu Roi himself, giving a gradually intensifying performance which culminated in Ubus final shocking deed. Catherine Fergussons starlet Minnie-cum-young hero Bougrelas always managed to shine, and Bethany Stanleys sultry Scarlett morphed into the wicked sidekick Captain Bordure with aplomb. Lizzie, the sound effects girl (a thrilled Charlotte Wright) and Mercedes de la Zerda (Jean/Sobieski), constantly infuriated by frequent deaths, kept the audience laughing and the suspension of disbelief precarious.Mere Ubu (Sarah Harrison) was comically scary. The clown-like Ubu costumes and dress-up box clothing by Amelia Ross were just right. Lighting by Chengyan Boon created dark spaces and focused action. Sound by Kate De Lorme added another layer of laughter. Set and props (Sarah Melo) were as much participants as support in this zany production, with fruit flying around the stage in an attack on a bed-sheet castle, a gruesomely comic feast and a grisly cave-bear death only the larger examples, not to mention a horse which no friend of Joey would recognize.