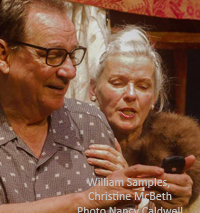 The roof leaks, the heating is defunct and youve ended up huddled for warmth in scarves and woollies in a single room of your family mansion. What can one do? In Vancouver of course there is only one answer. Sell it for a knock-down price (i.e., a fortune elsewhere) and in its place will rise a spanking new residence or a shiny block tower. In England though, there are choices.

Between the end of the First World War and the 1950s, country houses both large and small disappeared at a rapid rate. In 1955, one country house in 5 was destroyed every 5 days. Because these houses had been built and sustained by the rich and the comfortably off, were often of architectural merit and filled with well-made and well-designed objects and were seen to represent a fading way of life, they came to be seen as national treasures rather than as the property of an individual. And so there have been many measures taken to preserve them.

Here Alan Bennett steps in, examining, and mocking the revered National Trust which restores and maintains the stately homes of England, opening them to the public - the People. He takes pot shots at other English institutions including the Church of England and the film industry, skewering shibboleths as diverse as celebrity culture, chamber pots, knitting, South Yorkshire and more along the way. He also examines the layers of complexity around what is living and what is a time-capsule simulacrum of the real thing. After all, says Dottie, decay is a kind of progress, is it not?

Dottie, ex-couture model and Countess in her own right is hopelessly unsettled about her younger sisters plan to turn the disintegrating family castle over to the National Trust. She does not want people to come traipsing through her home nor her real home to become an exhibit. Her solution is to sell up and to that end she has invited an auctioneer to look through the attics. He is more than he seems as he also acts for a shady consortium of the rich who would like to buy the castle for their own private use, moving it to a warmer county such as Devon. Dottie also has an alternate plan when an old chum from modelling days shows up - a film director looking for a location. Though she suspects from the start that he probably has no money, it is some time before Dottie discovers that the film is pornographic - for which the Hepplewhite four-poster will be ideal.

She makes friends with the film company people who fix the heating, thus allowing her to have hot baths and wear Balenciaga gowns again. They also throw out various things that Dottie or the ancestors had hoarded, from old newspapers to the contents of the chamber-pot collection - the pee of Kipling, Shaw, and other luminaries.

Needless to say, practical sister, the Archdeacon June. is horrified.

People is a very funny play, witty and often absurd. Followers of 'Downton Abbey' and the 'Antiques Roadshow' should especially enjoy its barbs - the aforementioned four-poster bed is in its original wrappings. The fanciful can delight in the idea of Winchester Cathedral being sold to a syndicate witih plans for celebrity sacrament. It also touches on the dichotomies between value and price, between loss and an artificial preservation of history, between accommodation to the present and life-long values, between what is real and what is fake. That Bennett seems not to quite resolve his feelings slightly weakens the force of the play but under Adam Henderson's able direction still results in an entertaining and stimulating evening.