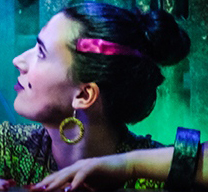 It is quite something to shine fresh light on such a well-loved and much performed play as Twelfth Night but that is just what Stephen Heatley and his students at Theatre at UBC have done. Set in a raucous, jazzy, New Orleans where none are quite what they seem, the performance pulls out the themes of love in all its variants, self-love, family love, homosexual love, heterosexual love, vain love and true.

Energy spills from the opening street-party scene into Orsinos (Nathan Cottell) usually languid call for more music, but here buoyant. Exuberance is everywhere from the lush Spanish moss hanging from the trees and the finely-wrought iron gate into Olivias house(courtesy Rebecca Burks) to the strongly-coloured costumes and varied designs by Shelby Page, nicely lit by Andrew Pye..

Shakespeares rich language fits perfectly into this setting and is kept up to the minute by the very modern inflections and physical expressions of the cast members.

Gender-blind casting is now fairly common and not shocking on stage, a state which can undercut the force of girl-disguised-as-a-boy as a plot device. Gender-blind casting runs amok in this production, but is sometimes both startling and illuminating. One principal and one minor character stand out. The sea captain who risks life and limb to follow Sebastian (Zach Wolfman) for love is cast as a young woman, the charming and surprising Catherine Fergusson. Usually this is a minor, slightly unsatisfactory theme, but casting a woman throws it into relief, highlighting another layer of complexity to the already varied aspects of love in the play. Niggling details of believability are cleverly dealt with. How such a girl could be the dreaded pirate described is neatly solved, and how she saves Sebastian in a fight is hilarious.

Casting Malvolio as a woman might seem utterly perverse but again by doing so, Heatley throws new light on the themes of love and substitutes for dated issues of hierarchy and knowing ones place modern issues of sexuality. Where Malvolio aspired to become the husband of his employer, and thereby a nobleman, Malvolia reveals actual love for another woman. The personal vain-glory and meanness belong equally to Malvolia as well as to Malvolio. Kudos to Allyce Kranabetter for bravely tackling this challenge.

There is no muddling of gender where Maria is concerned. Clearly chief housekeeper of Olivias household, Ghazal Azarbads Maria is a woman not to be crossed. She exudes authority, competence and sex from every pore. Charlottes Wrights Olivia is also every inch a woman.

The others of Olivias household, Javier Sotres (Sir Toby), Thomas Elms (Sir Andrew) and Cassandra Szabo (Fabienne) have a lot of fun with the sub-plots.

Jenna Mairs has been gifted by nature with the perfect physical type to play Viola and has gained the skills to put that gift to good use. She was thoroughly believable disguised as the boy Cesario, a lively and loveable hero/ine. The multi-talented Demi Pedersen offers a new take on Festa (Feste). She drifts in and out of the play as participant, observer and perhaps master-of-ceremonies, in the likeness of a New Orleans Mardi Gras character, an apt parallel to the Elizabethan court jester. With Richard Links new music for the songs and Lauren Stewarts sound design, she adds much to the magic of this play.