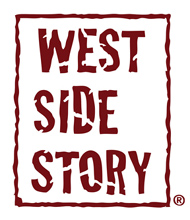 Theatre Under The Stars
West Side Story based on a Conception of Jerome Robbins, book by Arthur Laurents, music by Leonard Bernstein & lyrics by Stephen Sondheim

The play West Side Story was based and written to 'modernize' Romeo and Juliet to the problems of 1950's New York but the dark themes of hatred due to racial and cultural differences still exist in our world, today. As Director Rodgers says, “It’s a sad state of affairs that history continues to repeat itself and that we still have a race problem.” Set in the Upper West Side neighbourhood of New York City in the mid-1950s, this famous musical explores the rivalry between the Jets and the Sharks. These two teenage street gangs of different ethnic backgrounds pit families and friends against each other.

Here, Stephen Sondheim and Leonard Bernstein's masterpieces that have withstood the test of time are beautifully performed by a talented orchestra and an energetic caste of young and skilful actors. Songs like “Maria,” “America,” “I Feel Pretty,” “Tonight” are sung with deep emotion and an impressive vocal range. Jennifer Gillis (Maria) is brilliant in both her acting and her singing. Matt Montgomery plays his role as the starry-eyed lover with feeling and skill. Both, Jennifer and Matt sing an awe-inspiring duet in perfect harmony.

Rodgers is committed to honouring the script’s diversity in the casting as much as possible. In West Side Story, the Sharks are Puerto Rican, but Rodgers broadened her search, reaching out to Latino communities, where she found two of the leads, Alen Dominguez and Alexandra Lainfiesta (who play Sharks gang leader Bernardo and Anita, respectively). Both Alen and Alexandra play their roles well. Alexandra Lainfiesta, (Anita) the girlfriend of Maria's brother portrays the emotional turmoil- the conflicting emotions of love and hate-- she lives through, with great passion and talent.

Brian Ball, the set designer uses simple, iron trellis bars to depict the different venues such as the drug store, the wedding shop, the park etc. effectively and allows for quick change in positioning. It also suggests the poverty and bare-bone survival of the neighbourhood. Costume designer, Chris Sinosich, has the girls wearing bright colourful dresses and the men in jeans and suspenders that reflect the 50's. These also provide a good contrast to the stark, dreary-looking background of the scenes.

Despite the focus on social problems, that are still so relevant today, you will enjoy this great musical performance with its vigorous, spontaneous dance scenes and the sophisticated music that leaves you with hope and love. The fact that the play is performed under the Stars also makes it quite magical and beautiful.