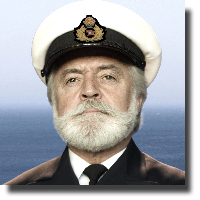 Theatre Under The Stars Musical Society

The tragic demise of the Titanic on her maiden voyage has continued to intrigue screenwriters, playwrights and composers. Perhaps the most profoundly imaginative retrospect so far has been this musical work that offers a cautionary tale of courage, cowardice and social class awareness.

Titanic – A New Musical is far from being perfect, it gets weighed down with an oversized cast and a storyline that has a predictable conclusion. Nonetheless, I found a lot of positives in the show. Not least, is Maury Yeston’s affecting music that is evocative of early twentieth century. Yeston’s score is highlighted by exquisite choral work and the phenomenal vocal range of performers like Sayer Roberts in the role of stoker Frederick Barrett, who made Barrett’s Song and The Proposal such standout tunes.

Director Max Reimer showed how to mount a large-scale work on a small-scale budget. Reimer, who also took responsibility for the choreography, maintained an even pace that kept the audience swept up in the drama. Lauchlin Johnston’s well designed rolling sets of the bridge, radio room and the ship’s decks insured seamless scene-shifting. Chris Sinosich must surely have been working day and night for weeks designing all the costumes from the officer’s uniforms to the elegant attire of the 'well-heeled' down to the utilitarian clothing of the passengers in steerage.

Watching the show in the open-air in early July gave a spectral sense of realism. While passengers were boarding the ship onstage, the audience enjoyed early evening sunlight, on the other hand, when the ship was sinking in the cold Atlantic, the Malkin Bowl was in darkness.

Peter Stone’s book primarily focuses on the autocratic Bruce Ismay (Alexander McMorran), Captain Edward Smith (Russell Roberts, whose son plays Frederick Barrett) and Titanic’s designer Thomas Andrews (Steven Greenfield) who starts off the show with an emotive rendition of In Every Age. All three leading actors turn in laudable readings, though, McMorran as the recreant owner of the White Star Line had arguably the most difficult role.

Among the handful of (real life) famous passengers who had their stories told are Isidor and Ida Strauss (owners of Macy's department store) portrayed with heart-warming effect by David Adams and Deborah Allman.

Perhaps in the interest of story-telling, Stone’s book occasionally plays a little fast and loose with certain facts. For instance Frederick Barrett didn’t go down with the ship - he survived. But hey! Titanic – A New Musical is good musical theatre – not a documentary.