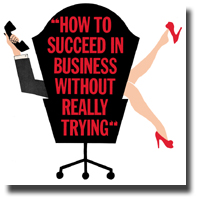 “Ambition should be made of sterner stuff,” says Antony in his eulogy of Caesar, but this heavy irony was light years before Shepherd Mead wrote the lighthearted book on the topic. Ambition figures prominently in the story by Mr. Mead that forms the basis for this year’s TUTS musical How To Succeed in Business Without Really Trying. There is, to be sure, a certain resilience, nay one might say an even foolhardy resilience to the ambitions of the main character, a Mr. Finch (Andrew Cownden) who rises from his position as lowly window washer to become an advertising executive for the World Wide Wicket Company.

Shenanigans aplenty abound in this song and dance extravaganza. From his meteoric rise from the inauspicious beginnings in the mailroom and all along the way through this play, office politics, inadvertent and blatant innuendo and inter-office in-fighting make this a clever climb to the top over the head, and shoulders above nepotism and a little office hanky-panky.

Soon it becomes apparent that the kiss of death for a company executive is to be saddled with that knock-out of a secretary Hedy (Cailin Stadnyk), who is secretly involved with the company president Biggley (Joel Wirkkunnen). Finch finds a way around it when he hits on the perfect advertising scheme, and makes Biggley think it was all his idea. Then, when things go radically wrong, Finch conveniently has an out with the chairman of the board, Mr. Womper (Michael Wild).

There are some delicious swipes at office sexism that are as relevant today as they were in the Sixties when this musical first became popular. “A Secretary is not a Toy” and the visually hilarious send-up “Paris Original” are stand-outs, both musically and for the excellent choreography of Shelley Stewart Hunt.

Both male and female leads do a great job. Politically savvy secretary Rosemary (Georgia Swinton) is admittedly not as meaty a role as Finch (Andrew Cownden), the man for whom she falls, and the chemistry between the two actors is perhaps not as intense as it could be. Nevertheless, this relationship is a good testimony to the often-tepid nature of office romance, where the best that the secretary can say at the end of the day is that she’s “Happy to Keep His Dinner Warm.”

Victor Hunter in his Bud Frump role pulls out all the blustering-stew-in-your-own-juices stops as a kind of ne’er-do-well nemesis for Finch. If Cailin Stadnyk’s sexy seductress of a secretary vamps the venue physically, then Jennifer Suratos as Biggley’s secretary Miss Jones does her best scat-jive to steal the show vocally with her solo performance in the “Brotherhood of Man” and then again in the “Finale.”

The humour and the plotlines in this year’s TUTS musical How To Succeed in Business Without Really Trying may be a bit dated and decidedly American (it’s a period piece after all), but the acting, the singing, the orchestration and the choreography are a tightly unified part of a performance with very high production values. Finally, Stanley Park itself is a matchless ambience, making for an even more memorable experience.