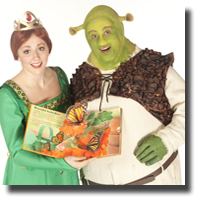 Theatre Under The Stars
Shrek: The Musical plus an interview with Shrek Choreographer Julie Tomaino

Opening night at the TUTS production of Shrek: The Musical was a hit and a miss viewing experience: much of the first act seemed to lag considerably, but it was like some hyper-energetic theatre coach gave them all a great pep talk during a half time intermission. The choreography, the singing, and even the acting ramped up tremendously, and the performance carried on to finish at a level far superior to those less-than-stellar opening sequences.

Most people having seen the movie know the story, so a brief recap of highlights will suffice. The cowardly and miniscule Lord Farquaad (playfully enacted on his knees by Victor Hunter) has banished all the fairy tale critters to the swampy nether regions which just happen to be the home of the loveable and loathsome ogre Shrek (played expressively by Matt Palmer). On his quest to reclaim the solitary existence of his homeland, Shrek meets up with a Donkey (played with feckless intensity by Ken Overbey) who becomes his trusty sidekick. Soon Farquaad decides that Shrek is the perfect candidate to act as his proxy to win the hand of Princess Fiona (brought to lustrous and luminous life by Lindsay Warnock), who has been trapped in a high tower and guarded by a fiery dragon (played like a diva by Sharon Crandall) since childhood.

Needless to say, Shrek defeats the dragon and wins the hand of the princess. Shrek and Fiona have several fairly hilarious bonding scenes (particularly riotous is the one that involves seeing who can out-belch or out-fart the other), and there is surprisingly authentic chemistry that passes (like gas) between Warnock and Palmer. No sooner do the two fall in love, but they have to surmount certain romantic challenges due first to a misunderstood conversation between Donkey and Fiona, and then to the fact that Fiona is affianced to Farquaad.

A highlight of the production includes the intricately choreographed “What’s Up, Duloc?”- a standout exception to an otherwise lackluster first act. Also excellent are the second act performances of Ms. Warnock’s buoyant and vivacious rendition of “Morning Person,” the wonderful ensemble choreography of “Freak Flag,” and the memorably melodic manifesto “Beautiful Ain’t Always Pretty.”

Aside from Julie Tomaino’s stellar choreography, Christopher King’s moving musical direction, a few strong performances by Palmer, Hunter and Warnock, and the excellent cameos by all the fairy tale characters, Shrek seemed to suffer from opening night jitters. It took a while to get going, but once it arrived, it was worth the wait. After a few performances, the uneven tenor of this production will undoubtedly give way to something much more powerful and compellingly enjoyable, making the trek to Shrek at the Malkin Bowl, a journey worth taking friends to see.

All in all, Shrek: The Musical has the potential to be this summer's scene-stealer of a sizzling stage show. And if August is half as hot as July promises to be, you’ll want to bring your sun-screen, mosquito repellant and prepare yourself for good fun!


An Interview with Julie Tomaino

Julie Tomaino recently took a look at a few questions I posed to her in anticipation of our opening night encounter with Shrek: The Musical. Ms. Tomaino has extensive experience across a variety of genres, and I was curious about which of them she incorporates into this play. Her responses to this and my other provocative questions are evocatively revealing. According to Ms. Tomaino, Jazz, Tap, Ballet, Contemporary, and Precision dance are the primary dance styles she incorporates into the choreography for Shrek, but she tries “to give each number a specific flavour unique unto itself.” For Ms. Tomaino, the most important thing is storytelling. She says she asks herself “what a number is trying to say and [then she] chooses the style, the staging, and the steps to support the narrative.”

I then asked about whether some facets of this production moved her more than the others, and which parts of it she finds the most memorable and “special.” Ms. Tomaino responded by referencing the number with my favorite Bugs Bunny allusion: “I love What's Up Duloc,” she says. “It's fun and funny and we all worked really hard on that number. I pushed the cast and they stepped up to the challenge. I also love all the Donkey/Shrek songs and scenes. Those two characters are at the heart of our show and every time they're on stage I get deeper into the story.”

While we were on the topic of unique and privileged pieces of choreography, I pressed Ms. Tomaino to tell me which segment presented the most unique challenges to her skill set and why this is the case? She replied that “the most challenging piece for me to choreograph was the Dragon's song, “Forever.” There were a lot of elements to take into consideration - it's the Dragon's introduction AND a duet between Dragon and Donkey, so that relationship is at the forefront. We also have six knights on stage singing back up and doing 'stalk' choreography (as the dragon’s prisoners—each in a guillotine on wheels), plus our Dragon is HUGE. I needed to marry all the elements together so that the piece worked as an entity both visually and in story. We worked in layers.”

It is evident that choreographing a musical like Shrek is a lot of intensive work, so I wondered what kind of a process Ms. Tomaino goes through with the actors when she is choreographing a scene and on average how many hours of rehearsal go into perfecting the more complex pieces of choreography? Ms. Tomaino’s response confirms my suspicions that this is an awful lot of work: “Someone once told me it takes about an hour of rehearsal for every choreographed minute. That is a good average, sometimes the process is a lot faster and depending on how complex a piece is, sometimes it can take longer. For big numbers, I usually work from the outside in -- I get the big picture staged and then get inside and detail all the work. When working with leads on solo/duet choreography, I try to read what is best for the actors and adjust my style to best suit their process.”

Finally, I was interested in knowing to what extent does the vision that director Sarah Rodgers brings to the play influence Ms. Tomaino’s choreography and whether she could articulate the ways that her own vision for the play intertwines and harmonizes with Ms. Rodgers’ vision? Her response confirmed that there is a tremendous amount of focused teamwork at the heart of what has been an arduous and protracted labour of love: “Sarah and I started talking about this show in January! She presented the overall concept and vision and I took that away and worked out ideas for specific numbers. Then we came back together and discussed everything in creative meetings before rehearsals ever began. I love working with Sarah; she cares so much about every detail of the show and I think that care and energy is infectious. Shrek is very much a collaboration between all three of us (Sarah, Chris King, the musical director, and I) and we are very proud of the work!”

Shrek: The Musical is clearly the product of a highly collaborative relationship between the actors and trained theatrical professionals like Ms. Rodgers, Mr. King and Ms. Tomaino who work behind-the-scenes to bring this production to life: they share a unified vision and a very well-trained donkey (and dragon)! Thanks to Ms. Tomaino for taking the time with this interview, and I look forward to opening night.