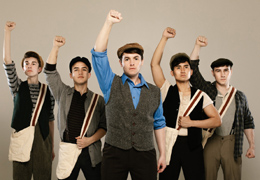 Theatre Under the Stars (TUTS) is back this summer at the Malkin Bowl in Stanley Park, with two energetic and fun musicals – Mamma Mia! and Newsies. Based on a true story made famous by the Disney film of the same name, Newsies is predictably cute with several catchy songs and characters with more pluck than you can shake a stick at.

Beautiful scenic Stanley Park cannot take all the credit for the atmosphere; set design by Francesca Albertazzi featured versatile late 19th century style metal scaffolding meant to overlook the dirty streets of New York, where the newsies tended to hang - often literally. These kids are school-aged but attend only the school of hard knocks, they “got no folks nowhere” and fend for themselves, scrapping for every dime. When newspaper mogul Pulitzer (played effortlessly and with great timing by the talented Jovanni Sy) decides to hike up newspaper costs, the newsies take a stand and fight through song and dance and of course many a pumped fist, led by their enthusiastic and passionate leader Jack (Adam Charles).

One of the opening numbers, “Carrying the Banner”, has three nuns giving food to the kids, and their sweet vibrato juxtaposed with the street kids’ gang vocals was a nice element in this song. Katherine, the young and pretty journalist who catches Jack’s eye, is a highlight of this production. Played by Julia Ullrich with an excellent vocal range and dexterity, Ullrich as Katherine not only easily holds her own as the only female voice in “King of New York” but is arguably the shining star. And being a sucker for tap dance, this was my favourite number of the show. Clearly I wasn’t the only one, as this song drew applause from the whole audience.

The ensemble cast of newsies were loaded with endless energy, and to their credit this energy was sustained throughout the performance and never petered out. Sy as Pulitzer made an excellent villain with a perfectly suited voice, expertly transitioning from spoken to singing. The Orchestra, led by Music Director Christopher King, executed a very old-timey musical score to match the time period. Vintage strings and trumpet were key in lending certain scenes extra energy and emotion.

With themes of fighting for what’s right, becoming united in strength, and kids with clenched fists, it’s hard not to love Newsies. It’s Les Miserables-meets-Annie. There isn’t much out there that is more appealing than a scrappy gang of turn-of-the-century street kids dancing and singing their way to fair treatment. And with the backdrop of Stanley Park and the same bald eagle I see every time I go to TUTS perched atop a giant Douglas Fir at stage left, there’s not much lacking in this unique open-air theatre experience.