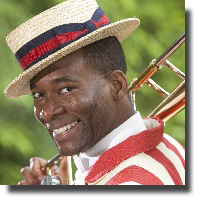 Theatre Under The Stars Musical Society

As dragonflies and tiny birds soared through the evening air, I took my seat within the growing crowds of the Malkin Bowl. The venue was stunning, the weather superb, and the atmosphere electric as an audience of all ages settled down, blankets and popcorn in hand. The band, live beneath the stage, ceased their tuning while a man took the stage to formally introduce our evening’s entertainment, The Music Man.

The introduction, addressed by actor Chris Adams, transported us to 1912 in a matter of minutes as political headlines and Model T mentions were delivered with comedic flare. It was a clever way to commence the night as the audience adopted an air of good humour before the show had even begun.

The Music Man is a musical production about a master salesman, Professor Harold Hill, who weaves a sneaky scam in River City, Iowa. He arrives with the promise of music - a boys marching band to fill the streets – but will he follow through? From the outset the audience is privy to his con, and watches as he dips and doodles his way in to the heart of River City. As with any good story, however, there is a sudden turn of events that blindsides both the townspeople and Harold in differing ways.

Having not seen this musical before, I was impressed by how physically demanding the performance was. Add to this the constant change in tone and speed of song and you end up with a remarkably engaging show. The cast and crew seemed well prepared for the challenge, with only a minor audio setback and one or two concerns with vocal range.

The production made good use of their space with clever use of props both large and small in every scene. In the category of set changes, The Music Man also did not disappoint, creating a feast for both the eyes and ears as actors seamlessly transitioned backgrounds and props while the band struck up a tune.

There were a multitude of memorable moments throughout the evening that included: the wonderful laying affect created by the ‘hens’ of River City cheeping away the day, the grammatical faux-pa’s executed by the mayor, and little Winthrop Paroo (Aidan Wessels) singing his heart out arm in arm with his sister and mother. Of course the footbridge kissing scene was unforgettable in it’s own right as well.

While I may have a soft spot for barbershop quartets, I feel the need to draw attention to The Music Man’s foursome: Allen Upward, Dave Vincent, Taylor Lewis, and David Cotton. They did a beautiful job throughout the evening providing snippets of song and background music for the cast and audience members to enjoy.

Two choice scenes of the show include Harold’s romancing of Marion Paroo (portrayed by Samantha Currie) in the library, and the ensemble performance of Seventy-Six Trombones. The former was full of humour as Harold and a gaggle of teenagers woo ‘Miss Librarian’ in to Harold’s arms, while the latter exposed a string of exciting choreography and high calibre dancing. Honourable mention goes to Adams’ rendition of Shipoopi; a mirthful song and dance number that cannot help but brighten one’s day.

While the tale is a classic, and therefore predictable, TUTS' mounting of The Music Man breathes life in to its outdated roots. The high energy of the cast, combined with the delightful music, set design, and inherently amusing nature of the script earned the performance a standing ovation. As I made my way from Stanley Park, through a throng of jovial theatregoers, a line from the show came to mind; “you pile up enough tomorrows, and you'll find you are left with nothing but a lot of empty yesterdays. I don’t know about you, but I’d like to make today worth remembering."