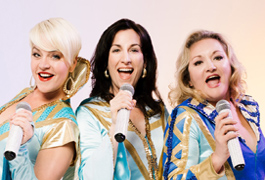 Theatre Under the Stars
Mamma Mia!

Theatre Under the Stars productions are virtually always delightfully entertaining evenings of high-quality acting, singing and dancing. Add to this a tremendously popular story with universally familiar music, and you have a potential winner. This production of Mamma Mia! hits the bull’s eye.

Shel Piercy’s experience with TUTS successes creates another hit this year, effervescent, colourful, poignant, and altogether heart-warming. He knows what the audience wants, and has the cast and crew deliver in full.

The sparkling liveliness in this production is a credit to Shelley Stewart Hunt. Her choreography is, by turns, imaginatively energetic, whimsical, and at times touching, but always an eyeful of graceful and demonstrative movement, whether by a crowd, a handful, a couple or an individual. Accompanied by Wendy Bross Stuart’s superior musical direction of the selected ABBA tunes incorporated into the show, cast members dance, prance and play their way into the hearts of the audience.

Keira Jang’s Sophie is just the right mix of youthful daring and innocent optimism. Her strong vocal talents bring the wishes and visions of her heart to the hearts of the audience. Caitriona Murphy, playing her mother, Donna, has an equally laudable voice and talent for sharing her sentiments. There are several other praise-worthy performers including Lori Ashton Zondag (Tanya) and Sheryl Anne Wheaton (Rosie), Donna’s best friends from way back; their singing and acting talents shine. Joshua Lalisan (Sky), Sophie’s fiancé, shows great promise with his rich voice and confident acting.

Donna’s lovers from the past (and possible fathers of Sophie) are in fine form, too. Peter Monaghan (Sam) also has a good voice, and uses it well on stage by singing through his acting, instead of pausing to sing. He is a pleasure to watch. Stefan Winfield (Harry) and Matt Ramer (Bill) bring great performances in their antics with the people and plights they find themselves in. A special mention must go to Jayda Banks for the wonderful whimsy she creates in her dance to Donna’s memories.

It must be said, though, that these performances would not have the life and impact they have, were it not for the support and background of the entire cast and chorus. The harmonics, hustle-and-bustle, and chaotic madness are of just the right degree to lift the performances of the high-lighters. Kudos to them all for bringing everyone to their zenith!

The enchanting effects and motion of the show are made possible by the striking, functional sets, designed by Francesca Albertazzi, and the colour and variety of costumes that so fit the 1990s bring eye-candy magic to the evening’s performance. Add to this the tremendous lighting (Robert Sondergaard) and sound quality (Brad Danyluk), and the soul-satisfying fun of this performance is a technical hit.

This TUTS production of Mamma Mia! sparkles. It’s a great family show, magnificently presented. Each year, we think the shows couldn’t get better. This is one that did. See it. Oh, and take your family. Oh, and be prepared to dance.