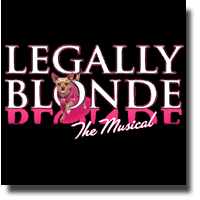 Theatre Under The Stars
Legally Blonde: The Musical
Music and lyrics by Laurence O’Keefe & Nell Benjamin, book by Heather Hach

“Omigod, Omigod you guys,” Legally Blonde was quite the surprise!

Jocelyn Gauthier was pretty in pink in the title role of Elle, and gave a convincing performance as an overly perky sorority president with a full head of brains. Peter Cumins was a great choice as Elle’s smug ex-boyfriend Warner who unwittingly convinces her to strive for acceptance to Harvard Law School when he leaves her for someone more “serious”. Scott Walters stood out as the loveably endearing Emmett with a chip on his shoulder, who helps Elle re-assess her priorities and go after what is truly important to her.

Valerie Easton was both director and choreographer, and Kerry O’Donovan was musical director. Brian Ball’s creative set design and Chris Sinosich’s fun costume design especially stood out. There were a few moments when background music overpowered the voices on the stage, and the odd microphone problem, but for the most part this was a top-notch production for Opening Night.

The talented Cathy Wilmot was an audience favourite as Paulette, a hairdresser, but it was Jacob Woike who stole the show in a brief walk-on role as hunky delivery guy Kyle.

There were some truly memorable musical numbers including singing sorority girls belting out “Omigod You Guys” and the hilarious courtroom scene appropriately called “Gay or European?”

While I was expecting it would mostly be made up of blonde university girls, the audience was an equal mix of male and female, gay and straight, blonde and brunette, and adult and child. There is plenty to do during intermission – try on some funky costume pieces and accessories and test out the fun photo booth to pose with a larger-than-life version of Elle’s chihuahua Bruiser or the gingerbread man from Shrek! I would recommend anyone take in this feel-good summer production that is sure to remind you that being true to yourself never goes out of style.