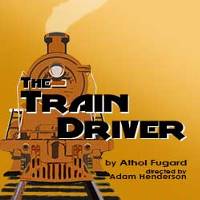 There can be no doubt but that Athol Fugards The Train Driver is an allegory about South Africa, apartheid and its aftermath, possibly also a paradigm of Fugards own life. But in the attentive hands of Adam Henderson and his cast it is also a coruscating Greek tragedy, a portrait of a man devastated by guilt for actions he did not cause and could not prevent.

John R. Taylor's set is bleak, a sandy surface scattered with hubcaps, old bits of pipe and small piles of stones, upstage a small hut, and a projected backdrop of a distant squatter settlement from which from time to time come the barking of dogs and the shouts of hooligan gangs like a Greek chorus. This is the burial ground of the unnamed, unclaimed dead. The grave-digger, Simon Hanabe (Pasi Clayton Gunguwo) describes to the audience a mad white man rashly searching the black grave-yard.

Incandescent with rage, Paul Herbert, the train-driver Roelf Visagie, burns up the stage. Desperate to find the grave of the woman he killed, he is not looking for redemption or to make some sort of restitution. He wants to curse her. In a headlong series of monologues, he tells Simon how she stepped with her baby in front of his wheels, how he has lost his job and his family; God and counselling have failed utterly and in fact he despises them all nearly as much as he despises the squalid living conditions of the black settlements where he has been searching. He despises Simon too for his poverty, his illiteracy, his rags, his smell, his job but accepts a place to sleep.

Simon takes all this calmly, answering simply when he can or letting Roelfs incomprehensible billows of emotion wash over him when he cant. Simons life seems as bleak as his grave-yard, his motives pragmatic. He gives Roelf a bed only so Roelf is not attacked by the ever-threatening dogs or squatters, he does not mark the graves with crosses because even two sticks of firewood would be stolen, he does mark them with stones, but only so that he knows where not to dig again. He is so incurious he cannot distinguish one body bag from another, not even one for a woman and child. Pasi Clayton Gunguwo is the still, phlegmatic match to Herberts wild and restless Roelf. Only in childhood pleasures do the two men begin to understand each other. A shared memory of bread and sugar snacks unites them for a moment. Gunguwos dancing description of catching a fish with his hands lights up the stage. While having far less to say than Roelf, Gunguwo, in a masterly performance, is constantly engaged, listening, absorbing, privately reacting, occasionally responding. In Gunguwo's hands, Simons epilogue, like his prologue, is as finely tuned as an aria, gentle, dispassionate and enigmatic.

Paul Herbert delivers a virtuoso performance, brilliant, shifting, sometimes broad, more often finely nuanced. His hysterical opening monologue set under Alan Brodie's glaring African sun lays bare Roelfs character, direct, unreflective, self-centred, restless with aggressive energy as he leaps from topic to topic. Some time later he walks round the graves under a moon and addresses a singularly moving monologue to the nameless woman he calls Red Doek, Red Kerchief, as he begins to understand her degree of despair. Herberts performance here is nothing short of brilliant, an elegiac adagio varied and coloured by voice and gesture, and utterly exposed and revealing.

Henderson, Herbert and Gunuwo have brought penetrating intelligence and subtle art to Fugard's study of post-apartheid South Africa. This is a must see.