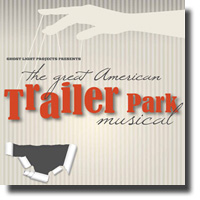 The Great American Trailer Park Musical was hilarious. The story takes place at an upscale trailer park, Armadillo Acres, in Florida. The opening scene consists of underwear and other garments hanging from two clotheslines strung outside a trailer.

Things heat up when a stripper, Pippi (Lee McKeown), comes into town and seductively tries to lure Jeannie’s husband. Jeannie, a trailer park girl and an agoraphobic (abnormal fear of open spaces), is married to Norbert, a tollbooth collector. Of course her girlfriends come to her rescue and try to run the stripper out of town. In one act the three girlfriends appear in pink tutus with toilet brushes to use as wands and begin pulling heartbroken Jeannie around on a toilet with wheels. This was truly one of the funniest parts of the play. The three girlfriends played by Jessica Kelly, Shantini Klaassen and Erin Palm were absolutely fabulous. Another scene in which the three girlfriends appear as rain clouds, wearing cloud masks and shiny grey leggings to appear like rain was ingenious costume design

The whole production was delightful. The Great American Trailer Park Musical was well acted, there were some weak notes in the singing but most of the vocals were projected well, especially by McKeown. The choreography by Britt MacLeod was fun and had the feel of originality. There were great one-liners, especially the one in which Lin (Erin Palm), one of the trailer park girls blurts out “Oh, let the whore sing!”

Director, Randie Parliament, presented seamless comedy. The effort and creativity put forth with bright colors, unique costumes and props notched this play up on my ratings scale. It was refreshing, uplifting and brought joy to the audience. There has not been much color or originality in costumes or stage props in most of the smaller venues that I have seen in the last year. This production was well worth seeing.

If you want a fun and uplifting evening I would recommend taking in The Great American Trailer Park Musical on until April 1st.