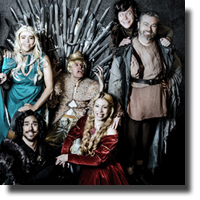 Throne and Games is an elimination comedic improv format inspired by HBO's Game of Thrones and the book series it is based on, George R.R. Martin's A Song of Ice and Fire. April 16th was gala night and the crowd was rowdy most certainly because there was a reception beforehand, and some audience members had a lot to drink.

The actors alternate on different nights, and according to the VTSL website, the improvisers involved in the gala night performance were Graeme Duffy (Baelish), Denise Jones (Arya), Brian Cook (Snow), Devin Mackenzie (Joffrey), Lauren McGibbon (Cersei), Allen Morrison (Drogo), Angela Galanopoulos (Khaleesi) and the the two women who also had to be alert and time sound and lights were Laura Skelton (sound) and Su Scarfe (lights).

"Alert" is the word for improv actors because you have to respond to the outcries of the crowd, especially a rowdy one. Sometimes an actor would try to respond, and even before he does, another drunk crowd member shouts something. I almost got deaf because there was someone behind me who kept on shouting at the top of his lungs.

As an actor, I never could do improv, and that's why I admire the alertness, presence of mind and the comedic sense of these improvisers. Comedy is hard, especially when you have to improvise. It's much easier to do tragedy.

Improvs too are meant for certain actors and likewise, certain audiences. Being an improv actor is not just training but talent. It's like someone who keeps on studying a certain language but never learns, while another picks it up so easily after a lesson or two. So also are improvisers. No matter how much you train, if you don't have the knack for it, you'll never make it.

Kudos to the actors and technical staff. I hope you get a less-than-rowdy crowd next time around, unless you love the challenge of having this kind of an audience.