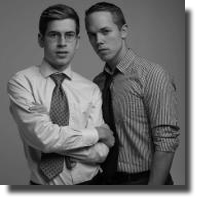 Fighting Chance Productions
Thrill Me: The Leopold and Loeb Story

I must admit that I had some misgivings before attending this show. I didn’t relish the idea of traipsing down a dark alley on a cold November night in search of the rear entrance to a former storage facility in the warehouse district of Main and Terminal. Also, not having ever seen this play before, I did wonder if the real life story of the murder of an innocent child by two over-achieving psychopaths was ideal fodder for musical theatre.

However, my temerity paid off and I was rewarded with some fine musical drama that might even be described as modern opera. This latest Fighting Chance production features the talents of Braedon Cox as Nathan Leopold and Michael Gill as Richard Loeb with Alison Dalton providing excellent accompaniment on piano.

The play opens at the parole hearing of Nathan Leopold in 1958 – his fifth attempt. By this time he had been incarcerated for 34 years. He responds to a requirement of the parole board to reveal his involvement and motive by disclosing his obsession for Richard Loeb. The narrative arc is advanced by Leopold’s parole plea through pulsing song in flashback, occasionally returning to the present (of 1958).

According to Stephen Dolginoff’s version, and most probably an accurate account, Loeb is the malicious and psychotic partner, who gets his kicks from creating havoc, then witnessing his destruction. Leopold, despite his superior intellect, is needy and the servant in a master-servant relationship. While Leopold displays initial reluctance to Loeb’s master plan to commit murder, he ultimately goes along and undertakes an equal share in its execution after they sign an aberrant pact in blood binding each other to the “perfect crime.”

Braedon Cox and Michael Gill reveal remarkable intensity as improbable collaborators. Gill as the more toxic Loeb is truly malevolent as he contemplates the murder of his brother in his repetitive refrain "If we Killed my Brother John." Cox and Gill combine voices to harmonious effect with “We’re Both Superior to all” as they mistakenly believe that their intelligence puts their crime beyond detection.

It’s Braedon Cox who invokes the most poignant musical moment in the show with “Life Plus 99 Years,” the same title as the real Nathan Leopold’s autobiography written while confined in Stateville Correctional Center.