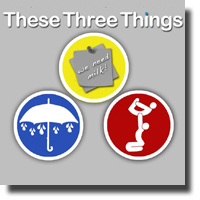 I like this concept of having three short plays in one programme. It gives variety to a show, and holds the interest of an audience, especially those with a short attention span. Each play is around 20-30 minutes and is introduced by different actors who appear in these three plays.The first play Acrobats by Israel Horovitz, was funny. Husband (Parker Heuser) and wife (Darsey Meredith), as they do acrobatics in front of an audience, quarrel and discuss getting a divorce. This is admirable--doing acrobatics and dialoguing at the same time. And I like Meredith's smile. Good work, guys!.

Wiser by Joe Hinks, is a one-man show.where the actor has umbrellas strewed all over the stage. Each umbrella has a story: one says "bitch" on it; another is heart-shaped and Hinks narrates the desth of his wife in the hospital, recounting the beeps of the heartbeat. There is a little slapstick where he opens an umbrella and water falls all over him. He also tells corny pub jokes, and interacts with the audience. I felt, for a one-man show, that this play should have been cut shorter.

The last play Post-It's (Notes on a Marriage) by Paul Dooley and Winnie Holzman was also well-done. It's the story of husband (Ray Boulay) and wife (Alexandra Wilson), all through the years they're married (until the wife dies), they send messages to each other with Post-It's. The ending is tragic and the older folks who were in the audience including myself identified with what might happen to us as we reach our eighties--the forgetfulness, verging on Alzheimers.

Kudos to the actors, directors and producers of These Three Things. I look forward to seeing more of their productions.