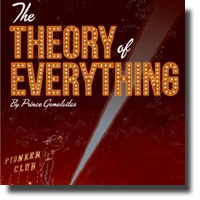 Vancouver Asian Canadian Theatre
The Theory of Everything by Prince Gomolvilas

Prince Gomolvilas is a Thai American playwright. His 2000 play, The Theory of Everything takes its title from an academically considered theory that explains why life exists in our universe. Lamentably, the play’s narrative arc is as abstract as its pretentious title might suggest.

At the play’s essential core are a collection of strung together monologues and a few irresolute discussions that are played out during the second act. That’s not to say that there aren’t redeeming aspects of this Vancouver Asian Canadian Theatre (VACT) production. The talented ensemble work hard to breathe life into Gomolvilas’ anomalous dialogue.

Seven Asian-Americans of varying age groups get together every Saturday on the roof of The Chapel of Love, a Las Vegas wedding chapel to look for UFOs. 65-year-old May is the eldest, her daughter Patty is a day from her fortieth birthday. Patty’s Japanese husband and best friend Shimmy, a Filipina-American, are about the same age. Shimmy’s son Gilbert and his buddies Lana and Nef represent the ‘twenty-somethings.’

The issues that these individuals have with each other and with their broader community are not specific to Asian immigrants, but to anyone living in a large urban centre. Patty and Hiro (Aurora Chan and B.C. Lee), who own and manage the wedding chapel, are struggling in their marriage while counseling would-be elopers. Hiro would rather be back in Tokyo rather than continuing to live in Las Vegas (who wouldn’t?). Patty believes in the existence of extra-terrestrials, but doesn't believe in the existence of God. Shimmy (Yvette Lu), a widow for 20 years, experiences a recurring nightmare upon the anniversary of her husband's death. Sexually confused Gilbert, who for some reason likes to be called “Ibuprofen” (yes, like Advil), can’t make up his mind on whether he prefers Lana (Quynh Mi) or her brother Nef (Issac Kwok).

While Gomolvilas’ writing has its limitations, it does offer an opportunity for the actors to stretch out and ‘sharpen the saw.’ Aurora Chan is one that takes full advantage, giving a nuanced performance as a woman repressing her self-imposed guilt of not being able to bear children.

Isaac Kwok, whom last I saw in the Capilano University student production of The Threepenny Opera three years ago, acquits himself well in the role of Nef who is considered to be “too American” for his girlfriend’s traditional parents. The multi-talented Yvette Lu has a lot to do as self-restrained Shimmy and generally does it well. However, her attempt at enhancing the role with a pseudo-Philippine accent simply didn’t work. Linda Leong Sum as the omnipresent May provides a reliable anchor within the discord emanating around her.

It was hard to believe that this was Alfred Gordon Liu’s directorial debut. He managed to maintain an even pace throughout and wisely allowed the actors free expression.

While I may not seek out other works by this playwright, kudos to VACT for bringing a poignant ‘dramedy’ which provides an insightful glimpse into the politics of ethnic identity and personal beliefs.