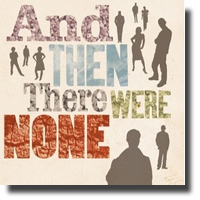 Theatre West Van
And Then There Were None by Agatha Christie

Theatre West Van is presenting And Then There Were None a classic murder mystery by Agatha Christie. Christie’s book was first published in 1939 (under a different title) and has become Christie’s best selling novel with 100 million sales to date. It has been adapted into several plays, movies and a video game.

Christie wrote the play two years after the novel was published. It was first performed at the St James’s Theatre in London’s West End in 1943. Christie considered this play to have started her career as a playwright. She is a formidable novelist and playwright.

The story is set in a mansion on an island off the coast of Devon. Eight people have been invited for the weekend as guests of Mr. and Mrs. U.N. Owen. The guests are looked after by Thomas (Nigel Barker) and Ethel Rogers (Delia Hughes). The Rogers have been hired just for this occasion as butler and cook . As the guests arrive they are met by Vera Claythorne (Claire Alan) who has been retained by Mrs. Owen for secretarial services and in the absence of her employer to act as hostess. The cast of characters also include General Mackenzie (Andrew Cleminson) a retired World War 1 hero, Anthony Marston (Christopher Dellinger) a rich, spoiled, good looking man, Dr. Armstrong (Simon Drake) a Harlay Street doctor blamed for the death of a patient, William Blore (Andre Fex) a retired police inspector, Philip Lombard (Jordan Navratil) a soldier of fortune, Irene Reynolds (Emily Brent) a rigid and repressed elderly woman, Sir Lawrence Wargrave (Barry Walker) a retired judge and the narrator (David McGlade).

In the drawing room of the mansion hangs a framed copy of the child’s nursery rhyme Ten Little Soldiers. Ten ceramic statues of soldiers sit on the mantlepiece. After dinner a gramophone record suddenly starts to play. The voice that comes from the gramophone accuses each guest of a murder. The stage is now set for the play to begin.

Hinson’s set is minimal. The narrow backdrop simulates a mansion on a craggy bluff. The stage is set with 10 brown chairs on a black floor. The narrator enters. He verbally paints the set for the audience. The audience imagines a typical English lounge. The only props include a watering can; a skein of wool, knitting needles and a tote bag, 2 trench coats, Vera’s handbag, a hangman’s noose; a dishrag/wig; a red curtain, three trays and a variety of glasses. There is some comic relief with wonderful moments such as when the human bell tolls. These moments worked to good advantage to add texture to the play. Hinson also plays with the chairs and the lighting in clever ways to enhance the story line.

The actors move through the play acting out the story line of the nursery rhyme. Ten little Soldier boys went out to dine; One choked his little self and then there were nine. Marston dies by choking to death. Nine little Soldier boys sat up very late; One overslept himself and then there were eight. Mrs Rogers dies of an overdose. Thomas Rogers notices that two soldier figurines are missing from the mantlepiece. Eight little soldier boys travelling in Devon; One said he’d stay there and then there were seven. General Mackenzie dies after predicting that no one will leave the island. The play proceeds while each new verse predicts the next death and figurines disappear from the mantelpiece until two people are left alive.

Suspense was missing from this production. A murder mystery should have the audience on the edge of their seats even though 100 million copies of the novel have been sold and everyone knows the plot. Claire Alan and Jordan Navratil demonstrated a command of their lines and development of their characters. It was evident that a lot of work went into the preparation of this production. The staff at the Kay Meek Centre and the actors are commended for their dedication to the local theatre scene.