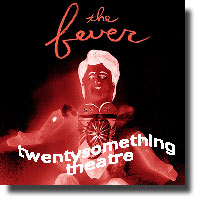 The Fever by Shawn Wallace

Another small theatre group, Twenty-Something Theatre, has emerged in the Vancouver scene. I believe it was named thus because the members of the group are all in their 20s. Students who finish their drama programmes in British Columbia have limited choices, and most stay home and start their own theatre groups.

This group and so many others have sprouted in the past ten years. I remember a decade ago I had to look for theatre in Vancouver as the choice was quite limited with The Playhouse and The Arts Club. Now there are all these small groups, and we're not looking anymore. The opposite has occurred: they're looking for us for publicity and reviews.

This is good and healthy. It makes Vancouver a cultural mecca and keeps reviewers busy.

There are all kinds of plays in town, and small theatre groups opt for one-man or one-woman shows as it's easier to handle and cheaper to produce. Naturally, most audiences go for entertainment, and it's just a minority that might attend politically-oriented shows like this one, and Rachel Corrie, which is simultaneously on with this one.

I like to see all kinds of theatre productions, and like the majority of audiences, I like the big extravagant shows that entertain, rather than these problematic, humanitarian plays that deal with justice and poverty and the like. Surely, this is good for the mind and the soul, but with shows like this, you can't expect big audiences.

Kirsten Kilburn, who plays Narrator in this one-woman show, is a fine actress. From her biog, I could see how much studying and professional acting she's done on stage and on film. I felt, however, that a one-person show that's almost two hours long, is quite tiring.

If I were to do a one-man show, I'd probably cut it to 45 minutes, because after this limit, the attention of the audience goes, and no matter how good an actor is, the tendency is to drift into dreamland. I may be wrong. I may probably be an exception to the rule.

Producer/Director Sabrina Evertt should consider these points when selecting a play. No matter how good a director or actor you are, if you choose a play that doesn't go with the drift of your audience, you'll end up with just friends coming to see the show.

This particular play, I feel, is more atuned to a New York or even a Toronto audience where people there are so concerned with political topics. Here in the West Coast, I feel that the audience is more laid back, and we don't like to think or fill our souls with angst because of power, injustice, and torture in Third World countries. The play was written by a New Yorker and albeit, it won an Obie Award. But that's New York and we're Vancouver.

What I suggest to emerging theatre groups here is adapt plays, or write their own, thus developing Canadian theatre, and in particular, theatre here in Vancouver, a town fast becoming the cultural mecca of the West Coast.