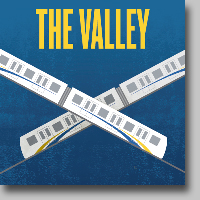 The Valley is an intense and true-to-life play affecting the lives of two middle-class families and throwing their daily routines into turmoil. These families are able to touch our hearts deeply as the language is so familiar. Joan Macleod uses not only the words of young Canadian teenagers and family members but also names of streets like Joyce and Pender that help her Vancouver audience to visualize the dangerous scenes along the tracks of our Skytrain.

Questions that the artist makes us delve into and for which answers are never in black and white are:
Who is the hero or victim in life?
How much protection do the police provide or vice versa, do police need protection from being sued?
What is love?

As Director Mindy Parfitt explains, The Valley is 'at times gentle and at times violent.' It is a story of 2 people struggling with depression while their families are thrown into the excruciatingly, difficult task of caring for them. Love is the thread that holds the families together and connects us all. Connor ( Daniel Doheny) as the teenage rebel acted amazingly with great passion and vigour. The other three actors Connor's mother ( Kerry Sandomirsky), a police officer (Robert Salvador who acted with appropriate calm and stoicism) and his wife (Pippa Mackie) are also skilled at playing their roles with great feeling.

I was particularly impressed with the stage which was stark and empty except for two chairs. It had a huge dark circular hole in the background which was brilliantly effective in portraying the Skytrain station. As Mindy Parfitt reflected, the urban pared-back set supported the quick rhythm of the play and accentuated the intimacy of the scenes.