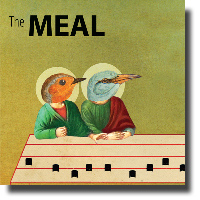 There was something eerily authentic in attending the 10.30pm performance of Rick Maddocks’ theatrical song cycle The Meal on Friday the 13th. Many people consider that the ‘The Last Supper’ likely took place around the late evening, probably close to this late performance start time. It’s also been regarded that having thirteen people seated at the table is possibly the original of the Friday the 13th superstition.

Maddocks however, takes part inspiration from the more controversial painting of The Last Supper that includes Mary Magdalene, which would have meant that there were fourteen people seated at the table. In Jeff Harrison’s set, there are only five place settings, including an empty place that awaits the arrival of an unnamed special guest, whom we presume to be Jesus, but is referred to as “the teacher.” The remaining four places- two either side of the empty chair – are occupied by John (Lucien Durey), Mary Magdalene (Jody Glenham), Thomas (Rick Maddocks) and Judas (Caleb Stull) who represent the (entire) group of apostles.

The sixty-minute show is split in two, but without an intermission. There is no dialogue throughout with the four singers (they lay no claim to be actors) reveal themselves completely through song; mostly in four-part harmony, but also in solo performance. The first set, staged before the distinguished guest arrives is decidedly upbeat and re-examines some of the parables. The second set, staged after the guest leaves is more melancholic and contemplative. Where an intermission might have been, a server (Sebastian Kroon) clears away the tableware.

The production is part secular and part deistic, but wholly a profoundly moving experience. The four singers each have mellifluent and powerful voices; particularly, Jody Glenham, who has one of the most naturally pure voices that I’ve heard in some time.

One complaint though, I could have stood for more restraint on the drums by Stephen Lyons. Thankfully he didn’t drown out the singers, but I hoped that he might relent before I got a headache – alas, he didn’t.