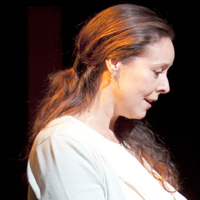 When the audience is finally allowed into the theatre pretty much at the 8pm curtain, there is already a neatly dressed woman sitting silently on a white plastic chair in the centre of a basic black box set. France Perras seems to be resetting her focus as the only actor in Jennifer Tremblay’s short play.

The List (La Liste) is essentially a Quebecois story, both in terms of setting and aestheticism. Shelley Tepperman’s sensitive translation concedes to elements of Tremblay’s language.

Known to the audience only as “The Woman,” the protagonist details her ordered existence as meticulously as the “to-do lists” she compiles as a daily ritual. She allows that her disposition lacks empathy, describing herself as “bitter fruit.” It’s clear that this overwhelmed mother and wife, though caring, is not where she wants to be. Even the lists that she so diligently puts together, contains items that are considered to be either imperative or discretionary.

Though seemingly reluctant to engage in community life, she does manage to connect with one local, easy-going neighbour called Caroline. Initially she is contemptuous of Caroline’s carefree approach to housekeeping, but eventually they become kindred souls. When Caroline gets pregnant and asks for a single favour, it gets routinely added to the bottom of the list as “Find doctor’s number” – and tragically, gets overlooked.

France Perras draws out the unique nuances of a woman’s self-reproach and isolation. Her preoccupation with the eponymous ‘List’ is really a metaphor for what she has (or lacks) control of.

Directing a one-woman show with little to go with but the actor’s talent can be tricky. Jack Paterson directs with a transparent, yet sure touch, varying the pace just enough to sustain audience involvement.

The less-than-an-hour runtime and spare staging gives the production a kind of ‘Fringe Festival’ feel. However, it’s still worth going to see, if only for France Perras’ idiosyncratic performance.