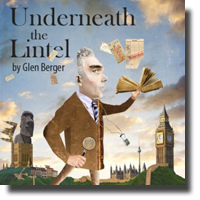 Pacific Theatre
Underneath the Lintel by Glen Berger

Underneath the Lintel is Glen Berger’s multi layered one act play that has at its core a tale of preposterous obsession. When a library patron has the audacity to drop off a library book that is 113 years overdue in the over-night deposit box it propels a fussy, eccentric librarian to embark on a quixotic quest to find the anonymous borrower.

Nathan Schmidt’s performance as the sole character, known only as ‘The Librarian’ begins before the play even starts. The play is presented in the form of a “one time only” lecture, so the audience sees Schmidt busily arranging and re-arranging his aids: a blackboard, a rotary slide projector and a chest containing “scraps” of evidence.

The play itself has a low narrative arc and relies largely on the delivery of its lone performer, who while consumed with his epic exploration, frequently digresses on his animosity towards a colleague and his regret about losing his sole-mate. The Librarian is certainly apt to ramble aimlessly, and seems to take pains in making his journey tortuously labyrinthine. Though, it should be accepted as part of his schtick as a befuddled lecturer. The more he drops his initial stance of self-pity, the more erudite he becomes.

Underneath the Lintel is certainly contradictory. It provides interesting historical references, but could hardly be described as a historical drama. Also, it might simultaneously be labeled both anti-Semitic and pro-Zionist.

Glen Berger’s play might actually be construed as a cautionary tale – of sorts. Standing “underneath the lintel” is the place where many of us decide which way to go; a place to choose to leave some crusades well enough alone.