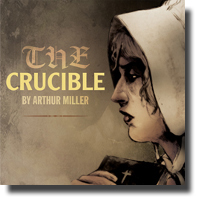 EXIT22
The Crucible By Arthur Miller

What would you do if your life depended on a lie that would destroy both your honour and integrity in one fell swoop? Would you swallow your pride or stand up for your beliefs? It was these questions, along with a string of others, which dominated by thoughts as I left EXIT22’s production of The Crucible.

The Crucible, written by Arthur Miller, was premiered on Broadway in 1953. The story, which is a fictionalized representation of the Salem Witch Trials in the late 1600’s, also creates an allegory for Sen. John McCarthy’s anti-communist congressional hearings and subsequent culture of fear which was unfolding at the time The Crucible was premiered. Though the play was only modestly successful at first, it did bring him some unwanted attention from authorities (not surprisingly), and later became one of his most produced and well known plays, eventually being adapted to opera and film.

The play begins in the home of Reverend Parris (played by Sam Angus); a man struck by fear for his daughter Betty, whom has fallen deathly ill for no apparent reason. The first act reveals Parris’ suspicion of his niece Abigail’s involvement in supernatural activities that possibly lead to the illness. He is afraid for his reputation however, and hopes to disperse the town’s growing concerns over witchcraft by bringing in an expert in the matter – Reverend Hale. While Rev. Hale seems interested in the case, he warns the townsfolk to heed his judgment, whether he finds evil or not.

At this point we have also met the past adulterous lover of Abigail, Mr. John Proctor, as well as a handful of other characters that make up an interesting cross section of the town’s populace. Drama ensues as Betty awakens in a fit and Abigail accuses Parris’ Barbados slave, Tituba, of relating with the Devil (this being the only explanation for Betty’s bewitched behaviour). The scene ends with Abigail, Tituba, and Betty all espousing their faith in God (and therefore saving themselves), and denouncing a lengthy list of women in the village whom they loudly and fervently accuse of witchcraft.

The second act takes place in Proctor’s home, where we are introduced to his wife, Elizabeth, and quickly learn that 39 women have been locked up, and that Elizabeth herself is on the chopping block. Elizabeth pleads with John to stop the fraudulent allegations that are taking place at the hands of young women rapt with vengeance and jealousy. The remainder of the scene finds John trying to reason with the authorities that seem to credit every accusation without proper evidence or rational thinking.

The third and fourth acts leave the audience in a state of incredulous awe as scenes of mass hysteria and manipulation unfold before our eyes. Deceit and hypocrisy abound as the voices of authority, in the form of the legal and religious systems, refuse to listen to reason, and unwittingly (we hope) condemn innocent women to death. The law in this case saw that once accused, the person must confess or be hanged - a classic case of being damned if you do, and damned if you don’t.

Themes of jealousy, pride, and justice are clear in this play, and we come to understand that John Proctor represents the voice of truth and reason, despite his lecherous past. Miller seemed to voice his own opinions through Proctor, and it is through this mechanism that we come to realize that Miller himself believed in standing up for one’s beliefs.

The play is expertly written, and this production does it great credit. The cast put on a somber and passionate performance, carrying the characteristic tension of this play throughout the production. John Proctor, played by Malcolm Masters, did a wonderful job of his part, as did Devon Thor in her sensational portrayal of Mary Warren. I enjoyed the energy that the entire cast poured in to their work, however, and noticed only rare moments of hesitation in speech, which could easily be a product of opening night jitters.

Interestingly, the most poignant moment of this play presented itself at the very end, when the cast came out to take their bows. Not one smile ventured the lips of these actors, a scene I have never before witnessed following a play. The effect was haunting, a dramatic reminder of the solemnity of the play and the harrowing message it provides.