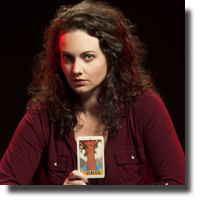 This ensemble piece may be overbilled as a “Canadian gothic,” though it does have elements of psychic capability, a random murder, and the power of media to influence opinion.

Faye (Emma Slipp) believes she has the ability to foresee events that are yet to happen. She gets frequent requests from family and friends for tarot readings. Her father Stan (Alec Willows), a common-sense veteran of a local police department is sceptical, so is her boyfriend John (Sebastian Kroon).

Set in rural Ontario, the play begins with Faye giving a tarot reading to an unseen visitor during a violent storm. Later, when John is about to set off to work at a local bar, Faye tries to persuade him to stay home. Faye obviously senses that something terrible is about to happen, but can’t explain what it might be. When John brushes off her premonition and goes to work, she ventures out on her own, and comes across someone she knows well who has been brutally attacked on a concession road. The ensuing events cause her to call into question belief in her psychic forte.

Director Katrina Dunn maintains an even pace throughout and overcomes many of the issues a new play presents. Nonetheless, relationships between characters are not always obvious. For example, when Sarah (Jillian Fargey), a hard-headed radio broadcaster who regards herself an investigative journalist, is informed by Stan that the victim is Bridgette, she responds with “our Bridgette?” This would suggest there is an inclusive association, but this is never fully explained.

The play is staged almost constantly in half light with single spot overhead lighting focused on the specific character involved in the storyline. Adrian Muir’s dramatic lighting and Mishelle Cuttler’s inspired sound design combine for some flashy storm effects.

David Roberts’ detailed and versatile set comprising of ramshackle sections of clapboard across the stage works for both indoor and outdoor scenes.

Recent violent episodes in normally peaceable locations have made this play oddly topical. Kudos to the cast and production crew for delivering a stimulating study in human behaviour.