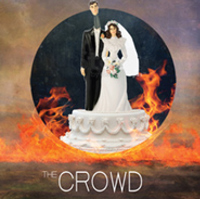 The Crowd beams a light on the working and not so working poor and the struggles they endure to carve out a life for themselves. Studio 58 found a play that supports the themes of the Green Thumb Theatre production as well as providing a performance in which teenage actors practice roles relevant to modern society, focussing on the complex cultural and systemic problems confronting youth. The Crowd provides theatre that stimulates empathy and debate of cultural beliefs, discrimination and poverty.

The play is a portrayal of the many difficulties facing the lives of Tina and Bobby. They tend to live in the moment, exciting and promiscuous lives with friends who are similar in habits and choices. Bobby and Tina’s wedding turns out to be a disaster but keeps the audience spellbound as each scene changes rapidly. Drugs, booze, sex, cops and jails together with the bonds of love and friendship are acted on with much feeling and teenage impetuosity till the drugs or the police take over. The result is tragic till dazzling strobe lights change Life for most of the players except for Tina and Bobby who choose to live a Life of love and caring on Earth.

Each teenage actor is given a moment to stand out and they all together do a marvellous job of dramatizing the stark reality of Tina and Bobby's surroundings. Leslie Jones as Delores acts brilliantly. She brings to the play a wealth of experience that helps the students to see her creativity in action. She, the veteran performer challenges the students to be completely in the moment. She does a great transformation from the disinterested cop to a disingenuous clown that keeps the audience entranced as are her 'teenage criminals' till.... a surprise landing.

The many teenagers in The Crowd play their roles with dramatic fervour. Bobby (Nathan Kay) as a meek, helpless teenager who unwittingly gets into trouble plays his part effectively while Tina ( Camille Legg) his young pregnant bride, heavy with child, shows her skills at being supportive and yet confused with grace and talent. Ricky (Scott McGowan) changes into a mature, responsible being. His transformation from a slow, irresponsible teen to a masterly man who takes charge of the situation is astounding. Scott McGowan has to be commended for his great performance. Jill (Raylene Harewood) played her role with much enthusiasm, too.

The changes of the set in the scenes with the moving of the few basic props are done quickly and efficiently. If there is a criticism, it is that there are umpteen scene-changes, with many scenes lasting only a moment. This tends to make the flow of the play a little disjointed. I understand that this is done so as to give each young actor a chance to be in the limelight. Otherwise, the performance was most enjoyable. The young actors produced a tragicomedy that was both educational and entertaining. It is indeed a great way of celebrating the 50th anniversary of Studio 58 and the 40th anniversary of Green Thumb Theatre.