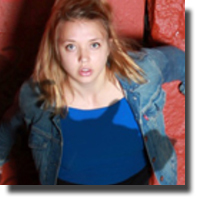 One can only wonder at the extent to which plays like Terminus, with its Spartan approach to both set design and plot strategy, may become the norm in an art form that seems to be facing increasingly diminishing funding allocations. Production values aside, there are certain advantages to such a minimalist approach. For one thing, it affords actors an excellent opportunity to showcase their individual strengths.

Emphasis is squarely on individualism here, because the only interaction is a narrative thread that gradually envelopes all three actors as their stories finally intersect while they run through their respective dramatic monologues. There is a real sense communicated throughout the play that these three characters each inhabit their own private hell.

This hellish alienation is partially because the actors rarely leave the relative discomfort of their respective cubes to engage in dialogue. When they do move, it is to transition upward to a higher cube. Yes, David Roberts’s set design consists of six dark, oversized, seemingly blood-smeared cube-shaped platforms separated from each other and raised to various levels.

From the vantage points of these cubes, each actor regales the audience with an animated often profane rendition of their grisly macabre life-and-death story until one actor’s ‘terminus’ ends with a ridiculously inane high note: the eviscerated serial killer belting out Bette Midler’s “The Wind Beneath My Wings” in a mock epiphany aimed squarely at the demonic incarnation of his own soul, who is solely responsible for his own final demise.

The real endgame strategy is a kind of ironic intertwining of these sordid stories. If Leanna Brodie’s streetwise ‘mother of necessity’ finds redemption for having destroyed her daughter’s life, it is neither satisfying nor does it come without a horrendous cost. But it is a price she willingly pays. If the demonic salvation and unexpected reincarnation of Pippa Mackie’s ‘daughter of desperation’ is utterly unbelievable, her convincing portrayal goes a long way to make the audience want to suspend their disbelief. If there is a repulsive and disgusting deviance to John Emmet Tracy’s ‘psycho-killer,’ he effectively brings out the dark comedic elements when he finally puts his own insecurity to death with a song that is never sung.

In the final analysis, these three actors all bring a vitality and verve to their unnamed parts. The fourth dimension that Director Richard Wolfe successfully integrates is of course the poetic language woven so seamlessly into this script. Under Wolfe’s direction, this production deftly transitions from one monologue to another with just the right combination of David Mesiha’s sound and Alan Brodie’s lighting, and the richly varied pacing of this play augments and enhances its edgy feel. The poetry of O’Rowe’s diction rarely devolves into doggerel, and although there are only a few cheap laughs and overly-cute phrases and the language is laced with profanity and graphic portrayals of gruesome sex and violence, it is easy to see that this playwright wants his audience to get a sense that the way we tell stories often puts us at a disconcerting remove from the true nature of those stories. Style often betrays substance.

Terminus seems designed to elaborate with frightening alacrity upon the view that if truth is really stranger than fiction, we might not be able to recognize it when we see it. Fittingly, the final line in the play—an aside about the Prince of Darkness himself—suggests that for those like him who possess tragic flaws, this view might be the most tragic irony of all.