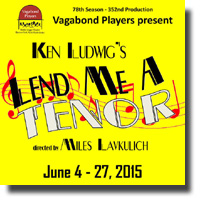 Vagabond Players
Lend Me A Tenor by Ken Ludwig

This is the final show of the Vagabond Players' season. The first matinee performance last June 7th got the almost full house audience laughing all throughout the performance. Liam Coughlan plays Tito Merelli, the world famous tenor. He exaggerated a bit, emoting with his Italian accent, but it got the audience giggling. Ryan Erwin as Max, with his secret hankering to sing opera, finally got the girl of his dreams as church bells rang as they kissed at the end.  Wayne Nolan plays Henry Saunders, playing his role to the T as the anxiety-ridden General Manager. Julia Grace is  his bubbly daughter, Maggie, who is also Max’s girlfriend. She played her part marvelously.

The supporting cast, Rebecca Oben as Maria, Tito’s voluble Italian wife, got that Italian accent and gestures to perfection; Diane Tzingounakis as the soprano, was comically seductive; Alison Main-Tourneur as Julia, the Chairman of the Opera Guild, was charmingly sophisticated; and Jeremy Heynen as a singing bellhop was hilarious.

I liked the way director Miles Lavculich did the curtain call--a cartoonlike summary of the play. Don’t miss this zany comedy which follows the tradition of the classical French farce patterned after Georges Feydeau's plays. One last note: Dwayne Campbell's scenic design was wonderful. Campbell is one of the last scene designers who can still come up with a set reminiscent of the 20th century scene designs of Broadway and London's West End.

Accolades to the actors and the production staff. Your last show of the season was just the right choice for the start of summer.