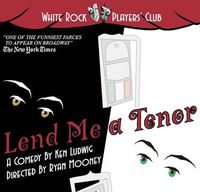 White Rock Players
Lend Me A Tenor by Ken Ludwig

Opening night was a fun night for the audience as they laughed all throughout this play and stood in ovation during curtain call. Directed by Ryan Mooney, this comedy is all about a famous tenor Michael Kalmuk (Tito Merelli) who is perfectly cast for this role--a humongous man with a big belly typical of Italian tenors like Pavarotti. Kalmuk was funny through and through.

But the one who really did all the work was Aaron Reno (Max) who was also physically right for the role--thin and tiny, a stark contrast to Kalmuk. I personally liked Launi Bowie (Maria) for acting exactly like an Italian, accent and gestures. She was indeed Italian. I wonder whether she lived in Italy for some time or has an Italian lover. Jackie Block (Diana) was perfectly typecast --- pretty, blonde and sexy, as she did her seductive manoeuvres on Merelli.

Nicole Smashnuk (Maggie) was likewise comical and did get a lot of laughs in her mousy role as the daughter of Saunders, orgasmically head over heels over Merelli. The only professional actor in the cast was Susanne de Pencier (Julia) who did a great job as the boss of Fred Partridge (Saunders). He was a bit cold in the beginning, stumbling over a few lines here and there. Nevertheless, he presented a proper delivery as Max's boss. The obnoxious bellhop played by Sean Donnelly got himself a few laughs with properly timed punch lines.

There were a few technical problems--the music was too loud, and we couldn't hear the singers, even if they didn't sing well, unless this was done on purpose because Kalmuk and Reno are obviously non-singers. There was a problem too with the lights. The main doorway wasn't lighted properly, and a lot of acting takes place in that area. But all in all, it was a nice set. I also don't agree with the repeat of the last scene after curtain call. I think the audience was happy with the play and there was no need for an encore.

This is a comedy worth watching, and I think it'll get better as the actors (since this is an actor's play) do more performances in the days to come.