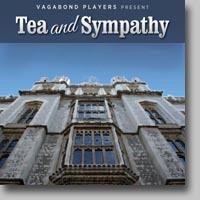 This drama, or melodrama as I'd rather call it, since the soaps started gaining popularity in the 1950s, explores a sensitive young man’s coming-of-age amid the taunts and suspicions of his classmates and teachers at a private boys’ academy that he is homosexual. Unlike today, homosexuality was taboo and considered a crime in those days.

This play, according to the author, was inspired by an incident where he felll in love with an older woman when he was in high school studying at a private academy. Director Matthew Davenport did a good job producing this play. It's pretty hard to do period plays from 60 years back, but I was impressed by the set which reminded me of the furniture we had in the 1950s when I was a child. I still remember that hi-fi console we had which looked exactly like the one on the set.

The acting wasn't bad for non-professional actors. I found Annie Arbuckle (Laura) really good. I saw her as Agnes in Agnes of God, and she's a terrific actress. Another outstanding actor Curtis Maguire (Herb). His voice resonated all over the place. This is good but for intimate theatre, I think he should tone it down a bit.

Carl Wiebe (Bill), from the programme bio, doesn't seem to have much experience in theatre, and from his acting, I suggest he should work more on voice projection, and slow down with his lines. I felt he was speaking too fast. Ethan Shankaruk (Tom) did fine as the sensitive, coming-of-age young man. Charlotte Wright (Lilly) had a somewhat forced British accent. I think she would work more on a New England accent.

The other players (Owen Caddell, Catlin Franks, Adam Beggs),who played friends and bullies did well, as did Jeremy Heynen (David) the teacher targeted for the homosexual affair with Tom. Kudos to Vagabond Players for another interesting show, and I look forward to their next show, Calendar Girls which, I'm sure will be a hilarious comedy.