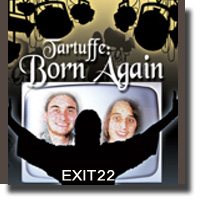 Tartuffe: Born Again Translated and adapted by Freyda Thomas from the original by Moliere

This is not how Jean-Baptiste Poquelin (a.k.a. Moliere) would have envisaged his play and I'm pretty sure he would not have approved of EXIT22's version. That said, director Dawn Moore should be congratulated for being able to "shoe-horn" this adaptation of Moliere's dark comedy about a corrupt cleric into a studio style production and make it work so well.

EXIT22 presentations also afford the opportunity for students in the Capilano University Theatre Arts Program to participate in all facets of live theatre.

For this mounting, Tartuffe is transported from mid 17th century Paris to roughly present-day Vancouver (this premise itself is a stretch, since our town is not 'bible-belt' and so hardly fertile ground for religious charlatans). He is a de-frocked spiritual leader and has turned his oratorical talents to tele-evangelism.

He manages to hood-wink Orgon, a local government officer into financing a bogus ministry, much to the irritation of his family. Oblivious to Tartuffe's deception, Orgon (Xavier de Salaberry) hands over his entire estate to the preacher's cause and alienates his son and daughter in the process.

Most of the first act is waiting for Tartuffe's arrival, which allows members of Orgon's household the opportunity to tender their sentiments. Unlike Moliere's original play where the psychological compass points to the tricked rather than the trickster; Tartuffe's creepy charisma is the primary focus here.

Victor Hunter is wickedly camp as the phoney evangelist. If he doesn't make it as an actor, he could always try his luck as a motivational speaker.

The other standout performance comes by way of Melissa Allina-Taylor, who is completely at ease with the rhyming dialogue and delightfully madcap as a feisty Dorine (promoted in this version to personal assistant) drawing laughter as she dispenses acerbic criticism without due regard of her status.

Chelsey Reist makes the most of her role as Orgon's dutiful wife, Elmire, and is irresistibly coquettish in the hilarious seduction scene. Less effective are Morgan Dunne who is allowed too much fun 'wheeling' around on roller shoes and Julie Trepanier has a tough job hiding her youthful charm in the character of a cantankerous grandmother.

Barbara Gregusova's schizophrenic designs attempt parallels between the past and the present. The costumes reveal conflicting elements of sumptuous 17th century and modern everyday attire.

Helped by a hard-working young cast of theatre arts students, Dawn Moore has pulled together a brash and high-spirited production, that, if audiences are prepared to abandon any sense of verisimilitude, are sure to enjoy.