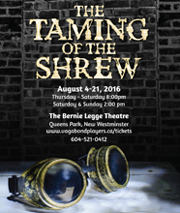 Shakespeare would probably turn in his grave if he sees this production. In fact, I think there should be a note in the programme saying that this is an adaptation of Shakespeare's work. True, the words are from Shakespeare, but reversing the roles where Kate becomes Kristopher and Petrucchio becomes Petruchia -- this is no longer Shakespeare.

It's been a trend in the past 50 years or so to present Shakespeare in different periods and genres. This probably started with Tyrone Guthrie doing Midsummer Night's Dream dressing actors in cowboy costumes. The trend continues with Bard on the Beach. We hardly have any more Shakespeare that's faithful to the Elizabethan style of production.

So it is with this production. You have actors dressed as RAF Cadets and women in leather tights. I don't even know what period this production is trying to represent. Or is it just being eclectic costumewise? Also, it appears that the thrust of the play, by reversing roles, is feminist pride: that women are the decision-makers, and men must bow down to them.

So I guess the production is merely reflecting trends in society. We have Hillary Clinton who might follow the footsteps of female Asian leaders like Indira Gandhi and Cory Aquino, strong women leaders. But I still insist, going back to this production, that it should warn the audience that this isn't Shakespeare but rather an adaptation of Shakespeare.