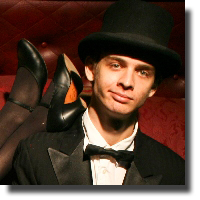 Carousel Theatre
The Taming of the Shrew by William Shakespeare

The Carousel Teen Shakespeare Program’s Production of the Shakespeare classic, The Taming of the Shrew proves that you do not have to be a literary scholar to perform or enjoy Shakespeare.

Ranging in age from 14-18, the players showed a great understanding of the play and the gender roles within it. Each actor more-than-adequately handled the challenges that each role presented, and several of the actors took on multiple characters.

Under the guidance of Carole Higgins, the Carousel production of The Taming of the Shrew keeps the audience captivated. Feisty and quarrelsome Kate (Anais West) bursts on the scene only to later appear somewhat tamed after her marriage to Petruchio (Aleska Andjic). Whether or not Petruchio really has subdued Kate remains undecided and West does a great job of conveying this ambiguity.

Luke McAndless David does a great job as the deceived drunkard ,Christopher Sly. Staying in character throughout the intermission, Sly is a lovely character that does not let the audience forget the metadramatic elements of The Taming of the Shrew, charming children and adults alike as he asks “What’s an intermission” and occasionally forgets himself as he tries to chase after some of the women in the play.

Each cast member does an excellent job of conveying the humour and nuances of this comedy to the audience. Lively and entertaining throughout, the Teen Shakespeare Program presents a play that makes Shakespeare accessible and enjoyable to all ages.