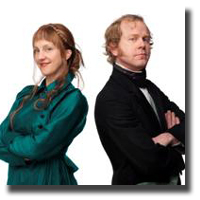 As darkened skies and evening’s breath bore down upon Vancouver, a host of bundled spectators turned their eyes to the stage of Bard. It was the opening night of Taming of the Shrew, kicking off the 23rd season of Bard on the Beach, and the grand tent was filled with excitement.

While the traditional introduction to this play was left out, the performance nonetheless drew the audience in with ease, inviting our attention to a funeral procession and a mourning widow, whose continual turns of fate served as an amusing subplot throughout the performance.

We soon meet the bulk of our cast, as suitors fill the stage in supplication for fair Bianca’s hand, and the shrew , “Katherine the Cursed,” makes evident her disgust with foolish men.

The premise of this play is oft repeated in these first scenes, preparing the audience for what lies ahead. We learn that Katherine (Kate) is a perceived shrew - a wretched and unwomanly character - whose lovely and adored little sister cannot be wed until the elder has been matched up. Lois Anderson (Kate) does a spectacular job of characterizing a completely horrid woman, a “fiend of Hell” as described by the decrepit suitor Gremio portrayed by Shawn Macdonald.

Yet her lines and body language tell a deeper story too– one that hints she is merely misunderstood – a woman caught in a man’s world, fearing her soul’s demise at the hand of an uncaring husband, unknowing how to react to this fear in a rational way.

Enter Petruchio (John Murphy), the very man to tame this shrew. This man, whom today appears cruel and unusual, plays a part that was unusually mild for his day. He opts to force the hand of Kate and deprives her of food and sleep in matrimony until she is broken.

“To kill a wife with kindness,” is his game, yet over time Kate catches on, seeing that there is a method to his madness and a way in which to act wherein they can be partners in marriage and peaceful in hearth. Anderson and Murphy are electric together, breathing life and exemplary comedic timing in to every scene that they are in. Their battles of wit and physical prowess (especially in their first meeting) are a delight to take in.

While the taming of Kate continues, the suitors of Bianca (Dawn Petten) wage their own war of hilarity. The young and enigmatic Lucentio (Anton Lipovetsky) becomes utterly infatuated by his love – “I burn, I pine, I perish!” - while Gremio continues to grumble and Hortensio (Kevin Kruchkywich), attempts to sing his way in to his lady’s arms.


Shakespeare’s much-visited theme of disguise plays a large part in this play, as the two younger suitors make themselves up to be tutors in order to win the affection of Bianca. Kruchkywich in particular shines in this role, as he changes his voice and mannerisms between characters (though the disguise itself is laughably feeble).

Not to be missed is Kyle Rideout and Kayvon Kelly, who are cast as the servants Tranio and Grumio respectively. Kelly in particular is found in numerous scenes enacting everything from being pummeled and scolded to cajoling in long underwear and singing a beautiful ballad.

While the main cast was wonderful, there is something to be said for those in charge of set changes. In the spirit of Bard on the Beach, every moment of the performance was entertaining, even those moments of traditional downtime. A pastoral setting prevailed, as props were moved about and paintings changed as subplots unraveled within the townsfolk and domestics lives.

The music merits praise. It did not detract, but rather added to the environment, providing an appropriate ambience to the unfolding events.

This early comedy of Shakespeare is of course a classic. It is a lighthearted and witty satire of his time that could be accepted by the masses and yet, it subtly challenged the framework in which they lived. When understood in this light, it is a story full of lessons that are relevant to this day. Bard on the Beach’s performance of this timeless tale is both true to its origins and understandable to today’s audiences. It combines clever use of space with exceptional Shakespearean acting to create a lively and engaging theatrical presentation for its audience.

The cast bowed down to a standing ovation and as the audience shuffled out into the evening air, I heard whispered remarks filled with praise. Opening night was well received, and for my part, very much enjoyed.